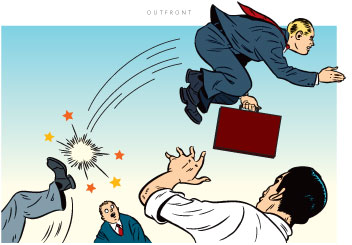 Every administration has its share of politically appointed deadwood—ex-campaign workers, big fundraisers, incompetent ideologues. Traditionally, after duds like Reagan Interior Secretary James Watt were exposed, presidents showed them the door.

Not today. In the Bush White House, the duds fail upward, obtaining ever more senior government jobs or landing safely in the private sector. This may be because, as Boston College political scientist Alan Wolfe has written, Republicans have become so disdainful of government that they no longer care if the bureaucracy is filled with the unqualified and the unscrupulous. This administration’s premium on political loyalty over substantive experience only makes things worse: A report last year by the House Oversight and Government Reform Committee found that in the president’s first five years in office, the number of political appointees hired without public scrutiny or congressional approval increased by one-third. (It had declined by 17 percent under Clinton.)

Some notable masters of professional gravity defying include George Tenet, awarded the Presidential Medal of Freedom for his slam dunks on Iraq and 9/11; Paul Wolfowitz, who went on to shock and awe the World Bank; and Federal Emergency Management Agency (fema) head Michael “Brownie” Brown, who now runs a consulting firm whose specialties include—you guessed it—disaster management. But they’re just the tip of the iceberg.

Patrick Rhode
started as: fema chief of staff, 2003-2006
heckuva job: Former television reporter and Bush campaign event planner Rhode had little disaster management experience when he came to fema. As Katrina drowned New Orleans, he emailed his boss Michael Brown, boasting that he was getting his hair moussed for TV rather than coordinating disaster relief efforts.
soft landing: In January, Rhode was hired as a senior adviser at nasa. An agency spokesman conceded that Rhode’s no rocket scientist, but explained, “He’s done a lot of things.”

Ellen Sauerbrey
started as: U.S. representative to the United Nations Commission on the Status of Women, 2002-2003
heckuva job: Sauerbrey, who had little international experience, pushed for pro-life language in diplomatic agreements, earning boos at U.N. conferences.
soft landing: Now assistant secretary of state for population, refugees, and migration, she runs relief operations all over the world. At her confirmation hearings, Senator Barack Obama (D-Ill.) pointed out that “you don’t have very specific experience.” Sauerbrey noted that she had overseen three Maryland counties as a census administrator. Three!

Hector Barreto
started as: Administrator of the Small Business Administration, 2001-2006
heckuva job: Under this former Bush fundraiser’s watch, the sba handed out $2 billion in contracts reserved for small firms to large companies and gave post-9/11 terrorism relief to an Oregon winery and a perfume company in the Virgin Islands. In a 2005 survey of government employees’ morale, the SBA ranked dead last.
soft landing: In April 2006, Barreto resigned, only to emerge as head of the Latino Coalition, a conservative Astroturf organization funded by A-list corporations from R.J. Reynolds to Verizon.

Hans A. von Spakovsky
started as: Counsel to the assistant attorney general for civil rights, 2003-2005
heckuva job: Von Spakovsky “has devoted much of his legal career to suppressing minority voting rights,” says J. Gerald Hebert, former head of the Justice Department’s voting division. Having worked for the Bush campaign on the 2000 Florida recount, von Spakovsky used his post as a top civil-rights enforcer to help launch an aggressive campaign to purge voter rolls, a move that would slash the number of poor and minority voters. On his watch, doj unsuccessfully sued to force Missouri to toss voters off the rolls. Half the career employees in von Spakovsky’s unit quit during his tenure.
soft landing: Bush appointed von Spakovsky to a term on the Federal Election Commission, making him one of the nation’s highest election monitors.

William G. Myers III
started as: Solicitor of the Department of the Interior, 2002-2003
heckuva job: A former lobbyist for mining and cattle companies, Myers signed a pledge not to deal with his old clients when he went to work for the government. In 2004, Interior’s inspector general found that he’d met with his former clients at least nine times while in office; accused of unethical conduct, he resigned.
soft landing: Bush promptly nominated him to the powerful 9th Circuit Court of Appeals. He now has the distinction of being one of the few Bush nominees who has never been confirmed.

Paul Hoffman
started as: Deputy assistant secretary of the Interior for fish and wildlife and parks, 2002-2006
heckuva job: A former aide to Dick Cheney and an advocate for more snowmobiles in national parks, he rewrote the rules to permit mining near national parks and essentially told the Park Service not to oppose projects that threatened sensitive environments. “Hoffman was just alone working on this overhaul,” says one former staffer. Even some gop senators expressed dismay.
soft landing: Bumped upstairs to a higher position at Interior.

Joseph Schmitz
started as: Inspector general of the Department of Defense, 2001-2005
heckuva job: Tasked with investigating fraud, waste, and abuse at the Pentagon, Schmitz instead found himself being investigated by the Senate for allegedly falsifying press releases, blocking outside oversight of his office, and possibly protecting Defense employees from criminal investigations.
soft landing: Upon leaving the Pentagon, he became an executive at the parent company of private security contractor Blackwater, which guards U.S. officials in Iraq.

Robin Cleveland
started as: Associate director of national security programs at the Office of Management and Budget, 2001-2005
heckuva job: Cleveland emailed then-Air Force Secretary James Roche asking for help getting her brother a job with a weapons contractor—just as she was working on a massive military aircraft-leasing program. Roche assured Cleveland about her brother’s job prospects, writing, “Smile. Give tankers now. Oops, did I say that?” Senator John McCain (R-Ariz.) launched an investigation and Roche resigned.
soft landing: When Paul Wolfowitz failed upward, he gave Cleveland a cushy new job at the World Bank.

William J. Haynes II
started as: General counsel of the Department of Defense, 2001-present
heckuva job: Helped set up the Guantanamo detention center, pushed the military to loosen its rules on torture, and refused to provide Congress with information about new methods of interrogation. Also created the military tribunal process, which the Supreme Court ruled violated the Geneva Conventions and U.S. law.
soft landing: Last fall, he was nominated to the 4th Circuit Court of Appeals, despite having tried only three court cases in his entire career. He’s since withdrawn his name.