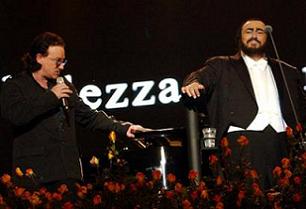 U2 band leader Bono has paid tribute to Luciano Pavarotti, whose collaboration with the band Bono reveals was at the opera singer’s insistence. Writing on U2’s official website, Bono says Pavarotti “lived the songs, his opera was a great mash of joy and sadness; surreal and earthy at the same time; a great volcano of a man who sang fire but spilled over with a love of life in all its complexity, a great and generous friend.”

The U2 star details how Pavarotti pestered the band to write him a song by “continually” calling up their housekeeper until the band agreed. The collaboration would eventually result in the delicate single “Miss Sarajevo” from the Passengers album. Pavarotti also once ambushed the band in Dublin with a film crew, hoping to convince them to play his festival in Modena. Bono and Pavarotti’s duet performance there is pictured above.

Pavarotti died this morning in Modena at age 71.

[update] Here’s the video for “Miss Sarajevo,” by the U2/Brian Eno/Pavoratti project Passengers, whose weird echoey chords owe more to Eno’s Another Green World than anything else, but just try not to get shivers when Pavarotti comes in at the 2:59 mark.