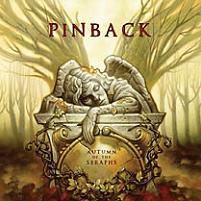 Anticipation is high for the first new material from San Diego’s Pinback since 2004’s Summer In Abadon made them critical darlings. That album’s single, “Fortress,” combined delicately strummed guitar and barely-enunciated lyrics with an insistent drum machine to create an unlikely radio hit, such as it was. Their new album moves forward a season but retains the quiet intensity: “Good to Sea” uses the same casio drum machine beat as “Fortress,” adding a simple keyboard melody, and the song’s melancholy sneaks up on you, until they sing, quietly, “Oh no/I’ve hit rock bottom.”

Pinback were known for slightly denser work on their first two albums, 1999’s Pinback and 2001’s Blue Screen Life, but got a little more polished and streamlined on Abadon. On Seraphs, they seem to slightly relax the insistence on catchiness that made Abadon a surprise hit, allowing more complex arrangements to sneak into tracks like “Blue Harvest:” syncopated drumming, surprising chord changes, layered vocals. But don’t get me wrong: it’s still catchy.

Even when Pinback speed it up, as on album opener “From Nothing to Nowhere,” they’re still reserved; this restraint is one of Pinback’s greatest assets. Maybe it has something to do with multi-instrumentalist Rob Crow getting out his volume-knob jollies in joke-metal side project Goblin C***? Unlike, er, G.C., Seraphs wouldn’t scare anybody at your nice dinner party, but I think it’ll also reward closer attention.

Autumn of the Seraphs is out 9/11 on Touch & Go. Grab an mp3 from the Pinback website:

– Pinback – “From Nothing to Nowhere”