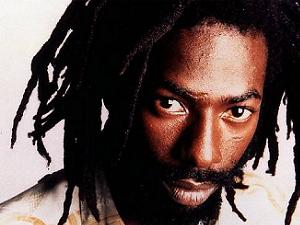 Dancehall superstar Buju Banton continued walking a confusing line on the topic of anti-gay lyrics this week, after protests against his appearance at the Reggae Carifest in New York. It has been both confirmed and denied that Banton signed the Reggae Compassionate Act, and this week the Gay and Lesbian Alliance Against Defamation lodged a protest against Carifest for inclusion of Banton and Bounty Killer for the violently anti-gay lyrics in some of their songs. NY1 talked to Banton about the protest, and he either denied promoting hatred or continued to promote it:

Banton said has a message for people who say he’s promoting hatred. “I would say to them they are ignorant, they are stupid, even though they proclaim to be intelligent,” said Banton.

The New York Times reported Banton did not perform his infamous hit, “Boom Boom Bye” (which contains the lyrics that most upset protestors) at the sparsely-attended festival. NY1 talked to attendees who seemed nonplussed by the affair: “It’s just music, so I feel when people make their music they have freedom of speech… I go to gay parade, I come to reggae music, but they don’t push us to go out there and bash gay people.”