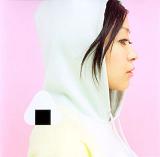 Variety is reporting Japanese superstar Utada Hikaru has achieved the record of largest-selling digital single ever, with “Flavor of Life” moving over seven million units. Label EMI made the claim despite the fact that there’s no real official body who counts these things, so it can’t be verified; however, the next-highest-sellers (O-zone’s nightmarish “Dragostea Din Tei,” with four million units, and in the US, Daniel Powter’s almost-as-horrific “Bad Day,” with two million) are so far behind, I guess nobody’s questioning it.

“Flavor” was available in a format to anyone’s, er, taste: mobile phone ringtones, mobile downloads, home computer downloads, ring videos, and “ringback” tones (the new thing where you hear it instead of a ring when you call somebody). Perfect for Japan where people basically live out of their cell phones.

Who is Utada Hikaru, you may be asking? It’s understandable: despite her massive Japanese success, an attempt to market her in the US as “Utada” failed miserably, and much of her best material still isn’t available domestically. You can listen to excerpts of both versions (the regular and “ballad” style) of “Flavor” on her official website here, but you can’t buy it. Unfortunately you also can’t buy the single that, in my opinion, is her best so far: the charming Madonna-reminiscent “Traveling,” which I’m admittedly partial to since it was utterly omnipresent during a brief trip to Tokyo six years ago. So, check out the awesome (if slightly overwhelming) video and an mp3 below.