I wonder if the answer to Clara’s question below is simply: “Why not?” Bush’s approval ratings are so low already that he had little to lose by commuting Libby’s sentence, and he’s made clear that he cares more about the judgment of history than his day-by-day approval numbers.

Also, I’m surprised by the decision to commute instead of pardon. Bush left Libby, who helped him launch a war of choice — no easy task, especially when the evidence is against you — with a felony on his record and a $250,000 fine to pay. In any place but Washington, his career would be over. Considering how loyal a man Bush is (see Gonzales, Alberto), you would think he would have gone whole hog and cleared the man’s record completely.

Is it a concession to the moderate middle? I hope not, because to everyday folks a commuted sentence and a pardon probably look a lot alike. After all, a rich, well-connected white man doesn’t have to do his jail time either way.

Raw Story has a lot more, including quotes from important people whose names you’ll recognize.

And for your enjoyment, a classic American picture — Ford explaining to the country that he had pardoned Nixon. 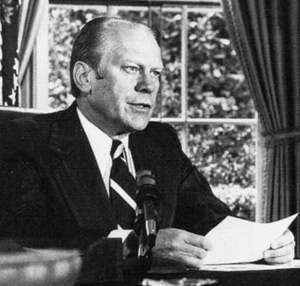 Update: Joe Klein over at Time‘s Swampland agrees that Bush had nothing to lose in commuting Libby’s sentence. He thinks up one thing Bush had to gain: the move stops Libby from writing a disgruntled tell-all.