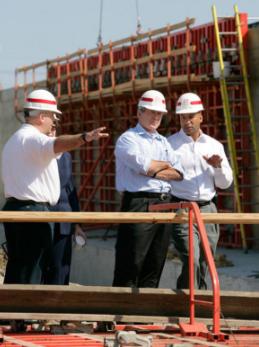 After Hurricane Katrina pummeled the Gulf Coast in late August 2005, tens of billions of dollars in federal and private contracts (the largest of which went to companies like Bechtel, Halliburton, and its subsidiary Kellogg, Brown, and Root) were dispatched to New Orleans to fund a clean-up effort the president said would require “a sustained federal commitment to our fellow citizens.” That, of course, never came to pass.

Thanks to its initial disastrous rescue effort, today, the Federal Emergency Management Administration (FEMA) receives most of the blame for the chaos in New Orleans. But it wasn’t just FEMA. The anatomy of the failed reconstruction is complicated, but understanding what went wrong requires examining the Department of Labor (DOL).

The DOL has been in decline for a generation, suffering from long-term decreases in funding even as the number of people whose livelihoods it is supposed to protect has grown. The problems have only been exacerbated throughout the six-and-a-half years of the Bush administration. But the consequences have never been more appalling than in New Orleans, where the failure of high-level DOL officials to require proactive oversight of reconstruction employers led to an endless string of abuses, which were detailed in part one of this series. After Katrina, employers, unfettered by rules, became less concerned with the task at hand than with profiting at the expense of workers without protection. They became predators in a lawless environment. Part two of this series examines how the DOL enabled such lawlessness.

What separates the failures at FEMA from the failures at the Department of Labor was the unexpected violence of the hurricane. FEMA should be, by definition, prepared to tackle serious disasters rapidly, and, as it failed to quickly organize, it deserves the criticism it has received so widely. But Katrina was an unusually punishing disaster, and even a perfectly smooth federal response wouldn’t have been able to prevent the storm from causing extraordinary damage and claiming a vast number of lives.

By contrast, the abuse of workers, at the hands of companies charged with rebuilding New Orleans, grew out of two preventable—and intertwined—circumstances. Many of the incidents resulted directly from policies written at the highest levels of government. Most others stemmed from the reckless milieu that those policies created.

That’s not to suggest that pre-Katrina labor standards were flawless, or even decent. Louisiana, like many other Southern states, had unusually weak state-level protections long before its biggest city was destroyed. But even small adjustments in priorities at the federal level could have forestalled employer abuse.

“There was a significant way it could have been mitigated,” said Catherine Ruckelshaus, who directs litigation at the National Employment Law Project in New York City. “When large amounts of federal dollars are put in a region, they come attached with pretty basic standards: environmental standards, labor standards, community-impact standards. In New Orleans there just weren’t any.”

Instead of imposing any standards, the federal government upended many of the most sweeping federal and state worker protection laws, in some cases by fiat. The administration fully suspended the 1931 Davis-Bacon Act, which requires almost all federally funded public works projects—whether administered by government entities or private firms—to pay its workers the prevailing wage. (If the DOL disagreed with this suspension, it didn’t voice its dissent publicly.) The DOL chose not to enforce Occupational Safety and Health Act (OSHA) protections.

Six months after the hurricane, Davis-Bacon was restored. And yet all employers whose contracts were awarded before that date—the vast majority—were allowed to continue to ignore the wage requirement as if the restoration had never happened.

Understanding why the nation’s most powerful labor-advocacy organization stood by while policies like these were implemented—and in some cases encouraged them—requires understanding the Department of Labor as an agency in both long- and short-term decline, currently headed by managers with a history of subverting labor protections.

A 2003 study by Annette Bernhardt and Siobhán McGrath of New York University’s Brennan Center for Justice found that the budget for the DOL’s Wage and Hour investigators—the officials who are tasked with protecting workers from exploitation—decreased by 14 percent between 1975 and 2004. Over the same period of time, enforcement actions decreased by 36 percent. Meanwhile, the number of workers and establishments covered by provisions that fall within the Wage and Hour division’s purview increased 55 percent and 112 percent respectively. Under President Bush, the decline has become more pronounced. This year, the DOL’s Wage and Hour enforcement budget is 6.1 percent less than it was before Bush took office in 2001.

On June 26, Rep. Dennis Kucinich (D-OH), chairman of the Domestic Policy Subcommittee of the Government Reform and Oversight Committee in the House of Representatives, convened a hearing to investigate the origins of the abuses perpetrated by subcontractors and other employers against those working to clean up New Orleans.

One of the men who testified at the hearing was Paul DeCamp. When Katrina struck, DeCamp, then a senior policy advisor to the Assistant Secretary of Labor for Employment Standards, became one of the architects of the DOL response. Last summer, he became administrator of the Wage and Hour division. While in the private sector, he worked as an attorney with Gibson, Dunn & Crutcher, where he co-authored a white paper that suggested a variety of ways in which employers could legally mitigate the provisions of the Fair Labor Standards Act (FLSA)—a fundamental worker and wage protection law which is one of the strongest on the books.

Today, he is the chief enforcer of that act, but in 2002, he wrote, “The FLSA presents unique challenges to employers. From the standpoint of compliance, the only risk-free way to manage exemption decisions is to designate all employees as non-exempt and to pay them on an hourly basis, but that option is inconsistent with sound business practices.” In other words, complying with the law is bad for business.

The DOL’s office in New Orleans was badly damaged by Katrina. According to Jennifer Rosenbaum of the Southern Poverty Law Center, its five-person staff shut down for nearly four months, even as Immigration and Customs Enforcement and non-profit groups had fully staffed operations up and running in the city by October 2005. When the Wage and Hour division finally resuscitated its operation in late 2005, it focused more on employer compliance assistance than on proactive oversight, such as targeting high-risk industries and performing unannounced inspections.

At the hearing, Kucinich noted that “the number of DOL investigations in New Orleans decreased from 70 in the year before Katrina to 44 in the year after Katrina, a 37 percent decrease.” Workers and advocates said that many workers—men and women seeking to file claims—never met a single DOL enforcement officer in the field, never heard back from the officials with whom they made their claims by phone, and found that their claims had been lost or inexplicably delayed. These hurdles have consequences. With a two-year statute of limitations on the claims over which the Wage and Hour division has jurisdiction, a great bulk of the infractions will have become permanent injustices by 2008.

And yet, going forward, the DOL is retaining its focus. Though its Wage and Hour division is capable of debarring the general contractors when their subsidiaries fail to pay their workers, they do not make it a standard practice. In response to a question from Sen. Ted Kennedy (D-MA) during DeCamp’s confirmation hearing to become Wage and Hour administrator last August, DeCamp said, “My understanding is that several are in process, where the remedy is being considered. And I believe it’s at least two or three.” None of the advocates asked about this could name a single example.

Today, the DOL’s FY 2006-2011 strategic plan for enforcing workers rights laws relies more heavily on passive measures than on proactive ones, and, like so many Bush-era reports, speaks overwhelmingly of goals instead of strategies. In the lone paragraph of this 100-plus page plan that is devoted to ensuring that workers receive the wages due to them, it states that, “the Department will continue its outreach and education efforts to increase awareness of employment laws among employers, employees and other stakeholders. Other strategies include using quantitative and qualitative performance indicators and targets to increase performance, conducting independent reviews of the program to identify opportunities for improvements, and improving data collection processes, especially those related to wage determination.”

By comparison, a 1999 plan released by the Clinton-era Wage and Hour division laid out an approach that included hiring dozens of additional investigators and targeting high-risk industries with preventive inspections, noting that inspections based solely around worker complaints “are not effective in securing widespread substantial compliance within an industry as a whole.”

The debacle in New Orleans has sunk well below the point at which minor changes at the federal level could redress even a small percentage of the worker grievances of the last two years. It serves as a reminder, though, that an unprepared or unmotivated federal government can have serious consequences for the citizens that rely upon it. According to Ruckelshaus, in the case of the DOL, many of the necessary changes are practically revenue-neutral.

“The federal DOL has had community outreach arms before,” she says. “They don’t require huge staffs. What we need first is more strategic uses of existing resources.” Only when the department revamps its approach will workers, in both the United States and from abroad, be able to trust that their rebuilding efforts in disaster zones will be met with just rewards.