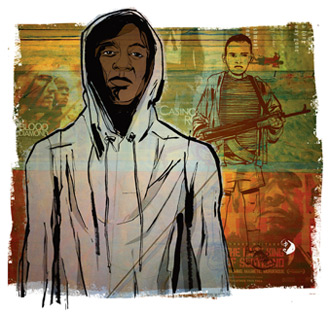 this is the year child soldiers went pop. They were the centerpiece of Blood Diamond, in which Leonardo DiCaprio played a child-soldier-rescuing diamond trader. African kids with guns made appearances in The Last King of Scotland and in the latest James Bond movie. Lost introduced a subplot in which the series’ West African strongman was revealed to have been a child soldier. Indie actor Ryan Gosling is reportedly set to direct his own script about child soldiers, perhaps inspired by War/Dance, a Sundance award-winning documentary that Variety called “Spellbound with orphans.”

In February, a handsome 26-year-old named Ishmael Beah published A Long Way Gone, a bloody, moving memoir of how he went from being a guerrilla in Sierra Leone to getting adopted by an American woman and finally attending Oberlin College. The New York Times Magazine put him on its cover; Starbucks sponsored his 10-city book tour and prominently displayed his memoir in its outlets. Time sneered that we’d hit the “cultural sweet spot for the African child soldier.”

This sudden fascination with photogenic survivors such as Beah seemingly reassures us that Africa’s young fighters can be redeemed if only they step forward to share their stories or win the heart of a kindly Westerner. But most former child soldiers remain in the shadows, whether they’re in West Africa or Staten Island, home to as many as 8,000 Liberian immigrants, and consequently what might be the largest concentration of child soldiers in the United States.

According to Staten Island community activist Rufus Arkoi, around one-fifth of the hundreds of young refugees he has met while working as a youth counselor and soccer coach were once boy soldiers. “They are reliving in their minds the violence and the roles they played. They think about the craziness they did,” he says. “They talk easily to me—we are very friendly. Otherwise, they keep the acts they have committed to themselves.”

Take Jonathan, a 20-year-old who lives in the borough’s Clifton section. Jonathan joined his grandparents in the United States in 1998, one of thousands of young war refugees who, with the help of aid organizations and the U.S. government, were brought to New York and granted political asylum during and after Liberia’s long civil war. He may or may not have fought in the conflict; he won’t say. In fact, he doesn’t want his real name used because of the stigma of just being a Liberian refugee.

Jonathan has gone from whomever he was as a boy to graduating from high school and getting a reasonably paid job as a loader at a giant retail store. “My dad is in Michigan. My mom is in Africa,” he explains as we walk down a cold, bare thoroughfare.

Strikingly handsome in a camouflage hoodie, he repeatedly touches the cell phone hanging off his jeans as if it were a talisman. “I help my grandparents,” he says. “I give them $100 a week of my pay because I live with them and I’m the only one working.” For these reasons, he is viewed as a success story in the Liberian community, although he doesn’t feel like it. “Around others, I smile and I act happy,” he tells me. “But I am not happy.”

Jonathan is clearly struggling to keep from drowning in a flood of bad memories. The trauma remains so intense that when, after some prodding, he finally does talk about the atrocities he witnessed—of men being tied up, guns pointed at people’s heads, gunshots like “firecrackers, so bright”—his speech becomes very rapid, almost unintelligibly so.

“I’ve seen horrible things,” he says. “I get up in my sleep. As time went on, when I came here, I stopped having those dreams.”

staten island’s Liberian immigrants are concentrated in a bleak set of housing projects in the borough’s Clifton, Concord, and Stapleton neighborhoods. Swelled by a wave of war refugees in the 1990s, this enclave is now the largest Liberian community outside Liberia. The community is the product of a reverse migration of sorts. What would become the Republic of Liberia was settled by black Americans in the early 19th century as part of a white abolitionist effort to send freed slaves “back to Africa.”

In 1989, rebel leader Charles Taylor invaded the country, launching the conflict that would brutalize Liberia for the next 14 years. During the war, government and rebel forces “recruited” 1 out of every 10 children—roughly 20,000 in all. According to Amnesty International, as many as 40 percent of all fighters were under 18. Conscripted into groups such as Taylor’s infamous Small Boys Units when they were as young as 10, they were handed Kalashnikovs, sent to fight on the front lines, and forced to commit atrocities such as killing friends and relatives.

The American media paid little attention to oil-poor Liberia’s disintegration, except to occasionally portray its young soldiers as an anarchic freak show—drugged; gun-toting; wearing wigs, dresses, and masks; self-christened with noms de guerre such as Sugar Water and Quick to Fire. The Washington Post described a “surreal” and “bizarre” conflict whose cross-dressing teen guerrillas carried “teddy bears or plastic baby dolls in one hand and AK-47s in the other.”

For the young Liberians who came of age amid this ferocious fighting, coming to America was an escape, but also an ordeal. The war left many without the education and resources necessary to fit in and succeed, explains Jacob Massaquoi, cofounder of the African Refuge, part of a small nonprofit that provides drop-in counseling for immigrant kids and families. “They have come from a very communal world to a socially isolated one.”

Some teens found that the survival skills they’d learned in the bush could help them assimilate—into gang culture. Their reputation for fearlessness preceded them. They smoked marijuana like cigarettes, formed gangs, and acquired new and better guns, Arkoi says.

“Many of the Liberian kids are not being raised by their parents—either they are in foster care or being raised by uncles or grandparents—and the gangs have become like their family,” says Sergeant Debbie Edwards, a community affairs liaison for the New York City Police Department. “We want to take these kids back.”

George, a 15-year-old boy who came here in 1999, says he usually holes up in his aunt’s apartment in the Stapleton projects after school to avoid “getting in trouble” with the kids who “stand there all day, dealing.”

“If I go out, I could get hit by a bullet,” he says. “I often hear shooting. There’s real fighting—crazy, getting high.”

In June 2005, a 20-year-old named Mustafa Fully killed an electrician in a drive-by shooting in front of a local deli. Fully, who some in the community believe was once a child soldier, is now in prison awaiting sentencing for second-degree murder. (Through his lawyer, Fully declined to be interviewed for this story.)

Last Christmas, a party for a large crowd of Liberian youth ended in a fistfight. According to a witness, one angry partyer was restrained as he screamed, “I fought in the war, and no one has the right to tell me what to do!”

The stigma of violence hangs over these young men, particularly among the members of their insular community who, a few years ago, might have been terrorized by the kids who are now their neighbors. “People resent them. They are wicked, people think,” Arkoi says. “My wife says, ‘Let’s move. These are bad kids.’ People are scared because of what they did. They don’t want to have anything to do with them.” Chea Dixon, a 25-year-old security guard who firmly tells me he “never held a gun” in Liberia, says he steers clear of other young men who “don’t know the difference between right and wrong.”

Paradoxically, the community’s shared history makes discussing the past harder. “I don’t tell people personal things about myself,” says George. “I don’t know how people are going to react.”

Many of the young men I spoke with said simply that they were “in the war,” murking up what they may or may not have done—or what was done to them. Not only is telling soldier from victim often impossible, but both groups suffer many of the same problems—growing up amid bloodshed, leaving their families behind at a young age, trading Third World poverty for First World alienation.

George is typical: He was separated from his parents by the war and then placed in refugee camps before being resettled in New York. “Mostly I think about my mother,” he says quietly. “I didn’t grow up with her. I haven’t seen her very much.”

Massaquoi says that the former fighters he knows dislike the label “child soldiers”; he insists that they be called “young victims of war.” As Jack Saul, a Columbia University psychologist who helped found the African Refuge, explains, “Those who were child soldiers and those who were not were both victims.”

in january, Jonathan took some of his American friends to the cineplex to see Blood Diamond. Set during Sierra Leone’s civil war, which raged alongside Liberia’s, the film tells the story of a brutish white Zimbabwean mercenary, played by DiCaprio, who in the end is won over by a doe-eyed child soldier and uses a giant, rose-colored diamond to reunite the boy with his family.

This triumphal ending of wealth and reunification didn’t echo Jonathan’s experience. “Black American kids will never understand,” he says with a sigh. “They were asking me in the movie theater, ‘Is that what’s going on back home? That’s crazy. Why did you stay?’ What was I going to do? I couldn’t walk to New Jersey!”

Nevertheless, the movie gave him a way to reveal a glimpse of the personal history he otherwise cannot bring himself to discuss. “It’s a good movie about my memories,” he says. “But I don’t want to talk about it. I don’t like talking about back home. I don’t go so deep.”