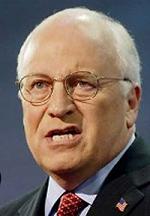 Dick Cheney has claimed that his office is not subject to National Security Archives oversight of its handling of classified information because the vice president, as president of the Senate, is not part of the executive branch. Yet, to avoid public scrutiny of his meetings with energy industry leaders, Cheney declared that going public “would unconstitutionally interfere with the functioning of the executive branch.” Question 1: Does this contempt for the constitution violate Cheney’s promise to uphold the same document?

Cheney apparently considers himself his own special branch of government, outside the requirements of democracy—and perversely, he may just have a point. The report by the House Committee on Oversight and Government Reform (more here) reveals that outsourcing of government responsibilities to private contractors is “the fastest growing component of federal discretionary spending.” And Halliburton, the company Cheney once led and from which he continues to receive payment, has taken the lion’s share of the growing business. Halliburton saw a six-fold increase in its income from government contracts under the VP—err, Senate President’s watch. Question 2: Is this ethical?

So maybe the Dark Lord’s ultimate agenda is simply personal greed. ThinkProgress points out that Cheney’s stock options are worth more than 300 times more now than they were at the start of his second term. By contrast, the taxpayers have not profited from the arrangement. The House report concludes that 118 contracts—worth $745.5 billion—”experienced significant overcharges, wasteful spending, or mismanagement.” Question 3: How is this not impeachable?