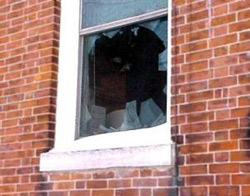 in miami last fall, amid news that corrupt housing authorities and developers had deprived thousands of poor people of promised homes, Ivan Martinez began projecting immense images against the walls of the luxury towers that have sprouted with wanton ambition in the footprint of demolished low-income housing. No one commissioned these images; Martinez is a guerrilla artist, an outlaw. As governments across America have imposed increasingly harsh penalties against postering, graffiti, and their requisite tools (New York has made graffiti-writing a felony in some instances, as has Ohio, convicting a man for spraying “Troops Out Now” on a highway overpass; Richmond, Virginia, threatens its citizens from the backs of buses, “Use a spray can, go to jail”), wall-size projections have developed as a fleet-footed alternative. One of Martinez’s ephemera featured a running silhouette crying, “Gentrification!!!!” Another showed a man saying, “I love downtown’s revitalization, but where are the poor people?” One night as Martinez and two friends were projecting from a moving car, police pulled them over and pointed guns at their heads. He hasn’t done a projection since.

Martinez broke no window, destroyed no property. Except through the play of evanescent light, he didn’t even “aesthetically alter” property, as some graffiti artists describe their work. No reasonable person would call him a vandal, one of those punks who elicit curses for their indecipherable scrawl. Like them, though, he made an unsanctioned claim on public space, which was enough to get a gun to his head, and shut him up.

Among a thousand political lies, one of the most durable, and lulling, is the assertion, central to a “quality of life” or “broken windows” theory of policing, that graffiti is the first link in a criminal chain that ends in murder. Hammer petty flouting of the law, the theory holds, and violent crime will decline. New York was the pioneer in this. Mayors Ed Koch and David Dinkins cracked down on graffiti writers in the 1980s and early ’90s, but it was Rudolph Giuliani who redefined quality of life in terms of a theory and practice of brute force that has since been adopted by city administrations and police departments across the land. Now the graffiti-murder continuum is widely accepted as fact. New York is officially the safest big city in the country unless one is unlucky enough to be on the receiving end of 50 shots, or 41, or a toilet plunger, from the police. It is also a strangely passive city, its political atmosphere inert. Like the midnight wheat-paster, whose posters about displacement or aids death distinguished the urban vista until the early ’90s, the dissenting slogan, the broadsheet alert to action from corner mailboxes, has largely vanished. Giuliani is running for president, and no handicapper counts his easy sacrifice of liberty to security as a political liability. He compares President Bush’s escalation of the war in Iraq to his own big-fist approach to New York, and suffers no harm for the implication of that admission: that he pursued a war on part of the city’s population while the rest of us became inured to punishment, to brakes on free expression and policing as a way of life.

Many New Yorkers readily embraced Giuliani’s zero-tolerance politics more than a dozen years ago. Graffiti can be ugly, after all, or menacing, a gang tag, artless and political only in the sense that any act of rebellion is. Its practitioners were called riffraff, like the beggars and junkies, the sex peddlers and small-time dealers, who could be exiled to the city’s far corners, locked up on Rikers Island, or sent upriver to a penitentiary. To sit on a grand jury during those years was to witness a stream of black and brown teenagers arrested for tagging and having a joint in their pocket, wearing “gang colors” and having a Philly blunt, scamming MetroCards, or dealing small amounts of drugs to cops who arranged the sale. Called for such a jury, I told the prosecutor that on principle I wouldn’t vote for indictment on any quality-of-life or drug charge. “Don’t worry about it,” he said, “I’ll always get a majority,” and he always did.

This was before New York made selling spray-paint to those under 18 a crime and created a database of graffiti writers’ tags for surveillance. It was before the city criminalized affixing, “by whatever means,” posters, stickers, painted slogans, and postings to almost any surface, and raised the graffiti penalty to as much as $1,000 per hit and/or a year of jail time; before it started rewarding snitches and allowed the sanitation commissioner to subpoena telephone records of numbers that appeared on offending posts. It was before corporate tags and ads impinged everywhere on empty space, and surveillance cameras (3,160 in public housing, approximately 15,000 in Manhattan alone) put privacy in the past tense.

As in New York, communities across the country gave police more reasons to stop and frisk people, hence more opportunity to find drugs as drug laws tightened to put more people away for a longer time. America’s prison population nearly doubled in the 1990s, and no one much complained. Prisoners were stripped of legal rights to challenge their conditions, and no one much beyond the Southern Center for Human Rights in Atlanta intervened. State after state restricted the rights of journalists to interview prisoners, and punished prisoner whistleblowers. In the speed of a decade, this self-declared free country had denied more of its people liberty than any country in the world, with stunningly little protest. Having gradually resigned ourselves to the trade-off of liberty for a promise of safety during the supposed good times of the Clinton years, is it surprising that after 9/11 Americans would acquiesce to secret prisons, kangaroo courts, torture as policy, the shredding of habeas corpus and due process, the invasion of our mail and private conversations?

One might retort, Absurd to think graffiti has anything to do with this catalog of restraints! Besides, a city has a right to regulate public space. True, but by such regulation it defines itself. There isn’t a great city without vice. The trick has always been to arrange society so that virtue tolerably outweighs it, so life is supple enough to accommodate the floating world where the two overlap, and sanctions are proportionate. Civil libertarians used to joke darkly that under Giuliani, New York became “a First Amendment-free zone.” His policing fetish didn’t just purge gang tags and porn houses; it closed public spaces to protest and led to a host of other efforts to quash dissent. Most of the latter were reversed in court, but the chill was on. “For the collective impact of such an unprecedented—and unprincipled—assault upon First Amendment values,” the Thomas Jefferson Center for the Protection of Free Expression gave Giuliani its first Lifetime Muzzle Award.

More than print, more than blogs or mass marches, outlaw art and political sloganeering are implicating acts, public but intimate, instant messaging for a culture of internal debate, ideological commerce on the cheap. Now in a time of cascading crises, people are cowed. Artists who’ve produced dissident works mostly show in galleries or huddle their images, “bombing” discreet buildings that like shrines to the dead, like the protest pens into which police herd demonstrators, manage anger into a curiosity. Activists tell my friends at the Public Works Project, which has produced striking graphics for organizations in hope of invigorating the culture of visual dissent, that it’s too risky to slap up posters. Last year Public Works made stickers of a bloody handprint labeled “Stop the War!” Protesters wore them on a march but refrained from pasting them on city walls as an after-echo. Later a similar handprint, not bloody, appeared in my neighborhood on multiple panels of a Levi’s ad. I bought a fat red marker and drafted a series of lines to run like a chant against indifference along the 18 panels, then asked a friend to act as lookout. “Are you insane?!” she said. Her friend’s teenage son had recently been arrested trying this kind of thing a couple of blocks away. Ironically, the crude tags of petty vandals have lately made a comeback. Fear, like polite restraint or getting caught, is for amateurs.

What does it take these days not to be polite, politically speaking? Up to 650,000 Iraqi dead, our government stalking Iran, arrogating to itself the right to pick anyone off the street anywhere in the world, declare him an enemy, put him in prison, scramble his brains—that’s not enough? Oh, settle down; ranting is juvenile. And the culture shrivels with our maturity. When anarchist kids spray-painted the Capitol terrace during an antiwar protest in January, liberals scorned the disrespectful “morons.” If police had cracked the graffitists’ heads or followed conservatives’ urgings to hunt them down and imprison them for violence against property, I doubt there’d have been a lament from the throng that marched in pens chanting, “This is what democracy looks like!” Actually, the anarchist tags were not big enough in their disrespect. Two years ago an artist, Jean-Christian Bourcart, projected giant images of Iraq’s dead and suffering people onto houses and markets, parked cars, churches in a small New York town at night. “A desperate gesture,” he said. I can think of none better. Imagine legions of imitators bathing the Capitol with the light-figures of those disappeared into prison or war or terrible want; disturbing the sheltering vistas of our cities and suburbs, so that we might live with what we pay for and allow until we refuse to live with it.