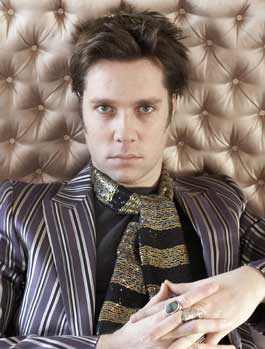 Singer Rufus Wainwright’s cabaret sensibility, classical influences, and foppish charm have made him a darling of baroque pop. Starting with his 1998 debut album, he crafted an instantly recognizable sound mixing orchestral arrangements and wryly self-deprecating lyrics.

His latest album, Release the Stars, stays true to that formula, while also marking Wainwright’s first foray into explicitly political songwriting. On the second track, he sings “I’m so tired of America.” In an interview with Mother Jones, he argued that “the reason the song is so explicit and so direct is that we are at a point where it’s painfully obvious that America has failed in the war, the environment, and a whole list of things…It’s a sad song. I don’t think it’s malicious. It’s more of a broken-hearted ballad about how we’re all basically devastated about the state of affairs.”

Mother Jones: Your parents [folk singers Loudon Wainwright III and Kate McGarrigle] established their careers in the ‘60s. How are your political songs different from their generation’s political songs?

Rufus Wainwright: I’ve certainly held back for many years in that arena, whereas for my parents’ generation, that was a whole genre and a whole way to sell records. [Laughs.] So it’s been much more measured. And I also have to say that in my time, we are dealing with a much more sinister media and an entertainment industry that is willing to cut off your voice. It’s definitely important that we make these sorts of statements, because not a lot of people are.

MJ: You once wrote that you admired singer Dusty Springfield for staying quiet about her sexuality because she “gave herself the right to enjoy being a lesbian in private.” Do you sometimes wish you’d been more coy about your sexuality?

RW: I wouldn’t have been able to accomplish that at all. If I had had more of a strategic attitude towards how to reveal my sexuality, and if I’d even played with it a little more, I could have sold a lot more albums and been a lot more famous. But I personally don’t have the ability to lie about my life, for better or for worse.

MJ: What advice did your parents give you about becoming a musician, and how is that different from the advice you’d give your younger family members who are pursuing musical careers?

RW: My parents always gave the best advice, and that is, “There’s nothing worse than a third-rate folk singer.” [Laughs.] And it’s true. They both were extremely critical, extremely opinionated, and not at all willing to coddle us, all three of us, in terms of our art. And if and when I have children, I plan to continue that tradition of no-nonsense criticism. Even if it’s wrong.

MJ: Well, do you plan on having kids?

RW: I don’t, myself, plan on having them, but my boyfriend loves children. If things work out and this turns into a longer sort of situation, then I might be forced to. [Laughs.]

MJ: The week before you checked into rehab in 2003, you spent a few days partying with George W. Bush’s daughter, Barbara Bush. How did that happen?

RW: [Laughs.] It was very brief and very…inconsequential. I just went to a couple of fashion shows with her and ended up hanging out with her and her legions of gay friends, which is kind of ironic. And she was very nice and very…oddly enough, kind of excited to be out in public, which I wouldn’t be if I was her. [Laughs.] And subsequently I haven’t seen her around much. But she herself was very nice and actually quite pretty. I consider that whole period to be somewhat of a mirage. Being with the president’s daughter, no matter who the president is, you are connected to the most powerful political force on earth, and that’s scary. And when you mix crystal meth and alcohol with that, it’s…kind of exciting. A little too exciting.

MJ: Speaking of that, in “Sanssouci,” you sing about longing to be back in a place “without care,” presumably a reference to drugs and sex. What’s your relationship to those now, post-rehab?

RW: Well, I’ll always be a — how can I say this? I’ll always be a boulevardier. I have an extreme reverence and romantic longing for all that is decrepit and fatalistic. That being said, it doesn’t mean you have to go there and do it, you know? And I think that’s the nature of any recovering drug addict. You realize pretty early on that you’re not going to change, that that fantasy will always haunt you one way or another, and that it’s just a question of letting it pass and not falling prey to it. In a lot of ways, I think that’s something that’s very common in humanity in general. I don’t think it’s delegated only to drug addicts — that idea of a palace that is carefree and full of beautiful people, that in fact, it doesn’t exist.

MJ: You have a rock star image, but many of the songs on this album have lyrics that are self-deprecating or even desperate. Isn’t that a contradiction — a desperate rock star?

RW: [Laughs.] Oh, God. All too easily. I think, once again speaking about “Sanssouci,” the parallels with rock stardom and the idea of a mirage in the desert that once you approach isn’t actually there are too painfully similar that it’s not even poetic. For years, you kind of long for attention and fame and notoriety and invites to all the parties, and once it actually happens and it’s going down, you realize that there are in fact no redeeming qualities to it whatsoever.

MJ: Your interests have always been broad, including jazz, opera, and classical music. Are you working on other projects that incorporate those influences?

RW: I am writing an opera right now for the Metropolitan Opera of New York, which is incredibly daunting and also exciting for me. It is my great passion and dream to be an opera composer. That’s where I’m going to lay down and die, in that room. And I also occasionally do these Judy Garland [tribute] shows, which are pretty outrageous. They give me a chance to demonstrate my prowess as a singer, which is important, because otherwise the little Judy Garland within me will stab me with her stilettos. I’m 33 and in my “Jesus year,” and I want it all right now. I want a perfect body. I want to have a perfect love affair. I want every member of my family to be healthy and happy. And I want the world to save itself and for America to realize that it has to give up its idea of being an empire. Wait until I hit 40; then it’ll all come crumbling down.

MJ: On the other end of the spectrum, do you have guilty musical pleasures you indulge in, but would never record?

RW: I’ve developed a bit of a fascination with John Denver. I always thought he was kind of tacky and somewhat revolting and had a kind of simplistic weirdness, but on second listen, he actually did have an incredible voice, and the blatant naiveté of his work is straight-edge, in a way. So, yeah, John Denver: guilty pleasure. If my mother heard that, she’d disown me.

MJ: How is this album different from previous ones you’ve recorded?

RW: I’m calling this album an “accidental masterpiece,” only because my intentions were completely dashed when I made this record. I really intended it to be a small, intimate, black and white, pared-down Rufus record with kind of a dark, sinister tone, and two months later, after a white flash of “I don’t know what happened,” it turned out to be the greatest and biggest record I’d ever made, without that much effort. I did all the arrangements and all the production and singing and writing. It was just fast and furious. I kind of lost consciousness for a large part — and I’m not talking in terms of drugs or anything.

Rufus Wainwright’s Release the Stars will be available May 15, 2007.