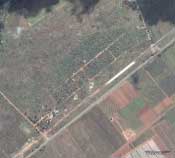 On June 28, 2005, bulldozers showed up at Porta Farm, a small settlement west of the Zimbabwean capital, Harare. The area had been targeted by Operation Drive Out Trash, which the government of brutal dictator Robert Mugabe claimed was aimed simply at razing illegal buildings. Amnesty International said the real plan was to evict poor Zimbabweans—such slum dwellers form the core of the opposition to Mugabe’s regime. With the country virtually off-limits to foreign press, that could have been the end of the matter.

Enter Lars Bromley. A geographer with the American Association for the Advancement of Science, Bromley paid $2,117 to buy archived images of the area and commission a new flyby from a high-resolution satellite company. The before and after shots (right) were indisputable proof that Porta Farm was gone; more than 850 buildings that had housed at least 6,000 people had been wiped off the map. “Within one day of getting those images out,” recalls Ariela Blätter, director of Amnesty’s Crisis Prevention and Response Center, “we generated more media attention for Zimbabwe than we had in 10 years.”

Bromley has also worked with Colombian researchers who used satellite data to pinpoint mass graves, activists in Burma tracking government persecution of the Karen people, and Amnesty staff documenting the genocide in Darfur. And in Iraq, civilians have reportedly used free GoogleEarth satellite images for their own geopolitical ends: to plan escape routes from dangerous Baghdad neighborhoods.