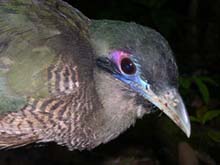 Orinthologists just got a hold of one of these iridescent green birds, received from a trapper in Indonesia. The foot-and-a-half long bird hurt its foot, and they are currently rehabilitating it until it is fit to be released into the wild.

The species was taken for extinct until 1997, when a single specimen was spotted. A camera trap snapped a pic of another bird in 2006. But even now, scientists classify the flashy avian as “critically endangered” and say it is at risk from human activity encroaching on its Indonesian jungle habitat.

While the bird was in captivity, biologists recorded its distinctive, high-pitched cry for the first time ever. The bird call—which sounds like a combo ofa rooster’s cock-a-doodle-doo and someone getting stabbed—will help authorities find out just how many Sumatran ground cuckoos exist.

The shrieking call of the cuckoo might have another use: cell phone ring tone.

The Center for Biological Diversity offers bird calls and wolf howls as ring tones with hopes that people will want to help the creatures who produced them. The strange ring tones might also make some humans shriek, but not so nicely on the ears as the call of the Sumatran ground cuckoo.