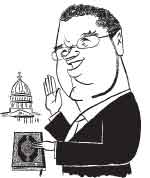 NOMINEE 2
Karl Rove vs. Rep. Steve Kagen
Freshman Democrat Kagen blamed Rove, who came to Wisconsin to campaign against him, for turning his race into a “knife fight” that cost him $2 million of his fortune. So it was with Soprano-like gusto that Kagen took his revenge, claiming that he cornered Rove in a White House john, crowing, “You recognize me? My name’s Dr. Multimillionaire, and I kicked your ass.”

NOMINEE 3
Rep. Keith Ellison vs. Rep. Virgil Goode
When Ellison (D-Minn.), the first Muslim member of Congress, announced his intention to be sworn in using a Koran, Goode (R-Va.) didn’t stop at bad before he hit ugly. “I do not subscribe to using the Koran in any way,” Goode seethed in a letter, menacing that thanks to immigration, “there will likely be many more Muslims elected to office and demanding the use of the Koran.”

NOMINEE 4
Maverick McCain vs. Kiss-Ass
McCain
In 2000, Maverick McCain (R-Ariz.) ran for president defending abortion rights and calling Jerry Falwell an “agent of intolerance.” Kiss-Ass McCain kick-started his ’08 campaign pledging to repeal Roe v. Wade, and hired Falwell’s debate squad coach to help beat Maverick McCain into submission. With mixed results: “I think the fence is least effective” as a border policy, Maverick said, before Kiss-Ass kicked in with a sop to the base: “But I’ll build the goddamned fence if they want it.”

WINNER! Ellison vs. Goode.
Ellison, a native of the teeming border town of Detroit, goaded Goode by swearing the oath of office on a Koran belonging to a far nobler Virginian: Thomas Jefferson.