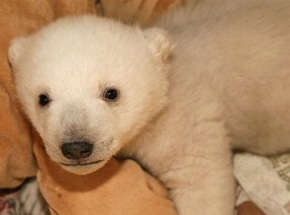 Cutie polar bear cub Knut made his public debut last week, to the sounds of thousands of cooing fans and 300 shutter-clicking media members. The fuzzy animal, now the size of a Labrador Retriever puppy, delighted visitors as he frolicked through a stream, kissed his keeper, and rolled in the dirt.

Berlin Zoo officials say the cub is not in danger of being killed, as a few animal activists have suggested. Instead, hand-raised Knut is the zoo’s star attraction, especially after his neighbor, 22-year-old panda Yan Yan died Monday, of constipation.

The Berlin Zoo has seen attendance jump by 300% since Knut appeared to the public, and the Zoo gift store had to order 10,000 more stuffed Knut dolls after their original 2,400 sold out. The cub now has his own television show, podcast, and a blog written from his imagined perspective. Graffiti artists are even spraypainting his name on concrete pillars under the bear-shaped logo for the Berlin Film Festival.

But for all the Knut-mania, is Knut really doing anything to preserve his kind? Well, kind of. The German Environmental Minister took a media-attended walk with Knut inside his pen, and has said Knut’s the property of all Berliners. “Knut is in safe hands here,” said the minister, “but worldwide polar bears are in danger and if Knut can help the cause, then that is a good thing.” He then tickled the cub under its furry chin.

Knut’s media attention may lead to increased awareness of the polar bear plight (though their plight is hardly obscure at this point). German public television is making a documentary about the bear, whose mother abandoned him and whose brother died of neglect. Schools across Germany are organizing “Knut trips” to go see the now-tiny (but soon to be huge) bear and learn about nature. And then there’s the mysterious conservation campaign for which Knut will be the star, photographs courtesy Annie Leibovitz. Seems young Knut will be kept quite busy, both as a goodwill ambassador and as Berlin’s (and the world’s) latest object of affection.