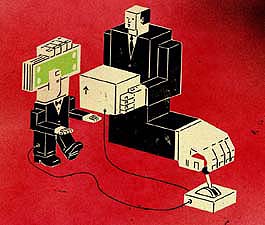 HERE’S A LITERARY CURIOSITY for our times. John Kenneth Galbraith was the most widely read economist of the last century, and possibly, after Karl Marx, of all time. Yet his most important book, though it sold millions of copies in four editions, has languished out of print for many years.

The New Industrial State was not my father’s best seller. That would be The Great Crash, his account of the 1929 Wall Street bust, continuously in print since 1955. (When I met Fidel Castro in Havana four years ago, his first words were, “The Great Crash! My favorite book! I have a copy on my night table!”) Nor was it his finest literary creation. That honor belongs to The Affluent Society, perhaps the last book in the history of economic thought to shake the conventional wisdom—a phrase coined therein—to its core.

Instead, The New Industrial State was Galbraith’s major work of new theory. It was his effort to actually replace the prevailing economic model with something more meaningful and more real. In it he forged a vision of the business firm not as a simple seeker after profits but as an organization, and of the matrix of such organizations as the essential basis of advanced capitalism. Traditional economics, still in the thrall of a small-town view of business firms, largely rejected this vision, but the large corporation did not go away, and the world still needs the theory set out in this book.

Corporations exist to control markets, and often to replace them. Business leaders reduce uncertainty not through clairvoyance (or “perfect foresight,” as the economics textbooks call it), nor by confident exploitation of probability (“portfolio diversification”). They do it by forming organizations large enough to forge the future for themselves. In politics these are countries and parties; in economics, big corporations.

Technology dictates that markets must be controlled. The products that define modern life—automobiles, jet aircraft, electric power, microchips, and cable television—cannot be produced except over long lead times and by integrating vast networks of engineering talent. This requires planning. Tasks must be subdivided so that organized knowledge—chemistry, metallurgy, optics, physics, genetics—can be brought to bear. The subdivided tasks must then be assembled. Customers must be found, and if possible committed, well in advance. These are the tasks of the Technostructure: the network of professionals who actually run organizations. Sometimes the planning goes wrong. But the uncertainties are mainly technical and organizational, rather than caused by the market. In an interesting example, Airbus has firm customers for its A380 at present; what it lacks are the actual planes.

Once control passes to the organization, Galbraith wrote, it passes completely; the economics developed to describe the small firm and its owner-entrepreneur becomes obsolete. Corporations work for themselves, not for their shareholders. In particular, they do not maximize profits merely to pass them along. To think otherwise, he wrote, “one must imagine that a man of vigorous, lusty and reassuringly heterosexual inclination eschews the lovely and available women by whom he is intimately surrounded in order to maximize the opportunities of other men whose existence he knows of only by hearsay.” Years later, when a few mainstream economists began to study the extreme detachment of shareholders from management, they called it the “principal-agent problem.” The language wasn’t as colorful, and the insights weren’t any deeper.

The Galbraith paradox is that the theorist of organizations worked alone—he was an intellectual entrepreneur. Meanwhile, the academic phalanx who scorned his ideas were organization men, conformist in view, careful tenders of their departmental franchise. None of them will be remembered as individuals, yet their hold on reputable thought remains absolute. Galbraith’s heresies triumphed in the open market; within the university they were repressed by methods on which he literally wrote the book.

Galbraith foresaw this. “The captious,” he wrote, “would be critical of any description of the social geography of the United States which, by assuming away New York, Chicago, Los Angeles and all other communities larger than Cedar Rapids, was then able to describe the country as essentially a small-town, front-porch community.” But so, in economics, are undergraduates still taught: The small, competitive, owner-managed business firm rules in the world of textbooks.

The New Industrial State appeared in 1967; the charge against it today is that it did not anticipate the thrashing that American business would get in the decades since. This came in four phases. First there was the Japanese challenge (especially to autos and steel). Then came the industrial collapse of the 1980s. In the 1990s, it was said that the technology bubble reasserted the controlling role of the owner-capitalist, personified by Bill Gates and Steve Jobs, over the firm. Finally, there came the corporate scandals—Enron, Tyco, and WorldCom.

That a book didn’t foresee the future is a familiar critique. Marx is often denied greatness for believing that revolution would triumph everywhere, when it didn’t. Galbraith wrote of the American corporation at the pinnacle of its power, while his critics were pretending that corporate power didn’t exist. Then they pilloried him for failing to predict its decline—which was said to prove, somehow, that the power had never existed. For his part, my father moved on, did not reply vigorously, and The New Industrial State faded from view.

This was a shame, for the lights of the book beautifully illuminate the later downfall of American corporate greatness. The Japanese challenge did not prove that competitive markets rule; it was simply the intrusion of one planning system onto the turf of another. That intrusion was managed politically—with “voluntary export restraints”—by Ronald Reagan’s self-described free-marketeers. The 1980s’ industrial collapse was not internal to corporations; it was inflicted by Reagan again, alongside Fed Chair Paul A. Volcker, through a campaign of relentlessly high interest rates designed to break the countervailing power of organized labor. That so many firms also perished was merely collateral damage. War is hell, as is often observed.

What became the technology boom started with the breaking off of part of the Technostructure from the large industrial firm. Unlike, say, wind tunnels, microprocessors were a technology with applications across many fields; their potential was greater if production was not tied to any single use. Those who started these firms were hailed as a new generation of engineer-entrepreneurs. But were they? Here, Robert Noyce, who went on to found Intel, is a better example than Gates. Noyce at first sold transistors to the military and to IBM, while remaining relatively unknown to the public. Intel, of course, sells to companies and not directly to consumers.

Microsoft, on the other hand, marketed its consumer products by hyping the image of Gates as the young geek-genius even though he was always its chief businessman and never its scientific leader. The superstar myth prettified a firm whose success rested at first on an exclusive franchise (again, with IBM) and later partly on much-questioned manipulations of market power. Neither Noyce nor Gates, nor any of their peers, ever resembled the classic owner-entrepreneur of a small competitive firm.

Finally, the recent corporate scandals are a pathology explicitly foreseen in The New Industrial State. There, Galbraith discusses looting a quarter century before it became a fashionable topic in academia. Reputable economists blamed the S&L crisis on the “moral hazard” of deposit insurance—as if insurance provoked otherwise sensible bankers to wildly risky behavior, similar to the notion that seat belts promote reckless driving. For Galbraith the failures lay in the subversion of social and legal norms. As William K. Black, today’s leading expert on control fraud, argues, one must choose. You can either believe that Enron was the innocent product of a badly made market, or that Enron suborned the market with criminal intent. Prosecutors, juries, and Galbraithians have had no difficulty choosing; more than 1,000 felony convictions followed the unraveling of the S&L fiasco. Kenneth Lay and Jeff Skilling met similar judgment.

The New Industrial State is not a perfect book. I find in it a few orthodoxies from which I wish my father had escaped. He wrote for large audiences, but of all his books, this one is the hardest. And yet, it is a landmark. Among economists it is an ill-kept secret that in the 40 years since the book’s publication, the robust faith that once surrounded the concept of the free market as an organizing principle has collapsed. Yet nothing much has emerged to replace it. The New Industrial State remains the doorway through which economics must pass, before progress starts up again.