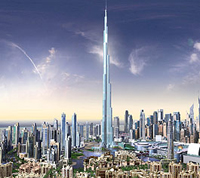 From the BBC: A class-action lawsuit filed in the US accuses the ruler of Dubai, Sheikh Mohammed bin Rashid al-Maktoum (and his brother and 500 other defendants), of enslaving thousands of young children from Bangladesh, Sudan and southern Asia and putting them to work as camel jockeys.

Mike Davis had a great piece a while ago on the “sinister paradise” that is Dubai. The Persian Gulf city state boasts a jelly-fish shaped underwater hotel, the world’s largest mall, a 24-square-mile archipelago of coral-colored islands in the shape of an almost finished puzzle of the world, high-rise resorts, thousands of mansions, a dinosaur theme park–you get the idea.

As Davis noted, under the “enlightened despotism” of its Sheikh, Dubai also boasts, if that’s the right word, labor laws skewed very much to the advantage of Capital.

South Asian contract laborers, legally bound to a single employer and subject to totalitarian social controls, make up the great mass of the population. Dubai lifestyles are attended by vast numbers of Filipina, Sri Lankan, and Indian maids, while the building boom is carried on the shoulders of an army of poorly paid Pakistanis and Indians working twelve-hour shifts, six and half days a week, in the blast-furnace desert heat.

Dubai, like its neighbors, flouts ILO labor regulations and refuses to adopt the international Migrant Workers Convention. Human Rights Watch in 2003 accused the Emirates of building prosperity on “forced labor.”