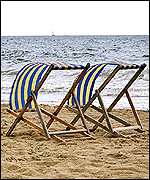 The Guardian brings word of research predicting that, as global warming brings the climate up to a steady simmer, fewer northern Europeans will fly south to seek sunshiny climes. Mediterranean countries will become too hot for lily-white Brits and Germans, while the south coasts of England, Wales and Ireland will experience a tourist boom.

The researchers have already used their model, which factors in changes in climate, population and economic conditions across the world, to predict that tourism demand will shift northwards and to higher altitude destinations. Now they have extended the model to include domestic tourists.

“More people will stay in their home country, particularly Germans and Brits,” said Richard Tol at Hamburg University. Germans are the most travelled nation with 72m international tourists and the UK is third with 53m. Both are rich with unreliable weather and close neighbours. But as the weather heats up, the model predicts more will stay within our borders.

The tourism losers in the next decades, are set to be Greece, Italy, Spain, and the Caribbean. Tourists will flock to the Baltic coast, southern Sweden, Ireland, the Alps, Croatia and southern Britain.

If the threat of melting ice caps, massive population displacements, and species extinctions isn’t enough to make people get real about global warming, maybe the prospect of British people (and I speak as one) wearing fewer clothes will. For pity’s sake let’s get this stopped!