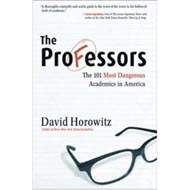 Appearing with University of California, Irvine professor Mark LeVine on the August 1 edition of Fox News’ Hannity & Colmes, right-wing activist David Horowitz refused to answer LeVine’s accusation that Horowitz “admitted on the air” that he “didn’t even write or research the parts of” his book, The Professors: The 101 Most Dangerous Academics in America (Regnery, January 2006), that were about LeVine, and “therefore couldn’t comment on how much
of it was true.” Instead, Horowitz said, “I’m not going to discuss things that happened on other shows. I have read what Mark LeVine has written.”

Horowitz and LeVine appeared on Hannity & Colmes to discuss the Middle East conflict, and during the discussion, Horowitz claimed that LeVine is “an apologist for the terrorists.” LeVine responded, “This is absolutely unconscionable for you to say. … Again, you’re lying like you did in your book.” LeVine then pointed to a prior debate he had with Horowitz
over the research for the chapter on LeVine from The Professors. On the April 9 edition of Mother Jones Radio Broadcast, host Angie Coiro asked Horowitz, “[T]his research [in the LeVine chapter] is credited to Tzvi Kahn. … How much of your work went into this chapter, per se? Did you clear all the facts, here?” In response to Coiro, Horowitz admitted to never having met Kahn, the researcher credited in the LeVine chapter of The Professors. Horowitz never addressed Coiro’s question, which she asked twice, about the extent to which he was involved in the production of that chapter.