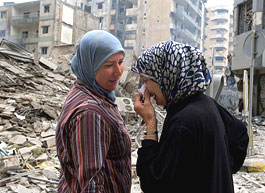 Lebanese civilians are overwhelmingly the victims of Israeli attacks, the U.N. concludes there are ground (on both sides mind you) for war crimes prosecutions, and few editorials find fault with the bombing of Beirut! Here’s Greg Mitchell of Editor & Publisher:

While it’s not surprising that nearly every editorial page in the U.S. has offered support for Israel’s right to retaliate against Hamas and Hezbollah, it’s a disgrace that few have expressed outrage, or at least condemnation, over the extent of death and destruction in and around Beirut — and the attacks on the country’s infrastructure, which harms most citizens of that country.

Hundreds of civilians have been killed in Lebanon, dozens of bridges and part of Beirut’s airport destroyed, power stations and ports short-circuited. Latest reports put the number of refugees at half a million, with thousands of Americans waiting for evacuation.

Amazingly, criticism of the extent of Israel’s bombing — and its policy of collective punishment — has actually decreased as the carnage has mounted. (Italics added)

This is unbelievable. Read on at E&P. (Photo: AP/Wide World Photos)

PLUS: “With Israel’s bombardment of Lebanon, the fighting in Gaza has been largely overlooked. But people continue to die daily in the territory with 103 Palestinians killed so far, and Palestinian fighters continue to fire rockets into Israel.” (AP)