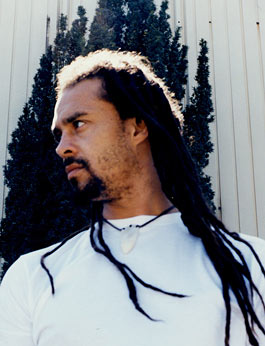 In his most recent project, musician and activist Michael Franti melds music video and documentary film to showcase the stories of the people he encounters in a journey through the war-torn Middle East. For a couple of weeks in 2004, Franti, armed only with his guitar, traveled with a camera crew in Iraq, Israel, and the occupied Palestinian territories, meeting people of all stripes in an effort to understand the human cost of war. The record of the trip, entitled I Know I’m Not Alone, has won acclaim in recent months at numerous film festivals across the globe.

Franti seems prepared to embrace whoever crosses his path. As he passes into Iraq, female officials shyly touch his long, black dreadlocks, which he slips to them through a teller’s window. On the streets of Baghdad, he makes children and grown men sing, dance, and clap along to a ditty consisting only of the word “Habibi,” an Arabic term of endearment. He plays “Bomb the World” to a group of off-duty American soldiers in what he describes as “the hardest show I’d ever done in my life,” and later facilitates a party that brings them together with the Iraqis behind Baghdad’s first independent radio station.

Franti also witnesses the wanton violence of street bombings and sees firsthand the chaos of life under two separate occupations. He visits a children’s hospital in Iraq, and speaks with dozens of refugees in Gaza and the West Bank, Israeli soldiers, and grieving mothers from both sides of the divide. As Franti recounts in his film, “This trip made me realize one very important thing, which is that I’m not on the side of the Americans, Iraqis, Israelis, or Palestinians. I’m on the side of the peacemakers…whichever country they come from.”

Widely acclaimed in peace and social justice circles, Franti, the front man of Spearhead, has long tackled issues such as homelessness, AIDS, war, police brutality, and the death penalty in his music. He is also the force behind the annual Power to the Peaceful music festival in San Francisco. Mother Jones recently caught up with Franti to get his take on the war in Iraq and talk about his newest venture.

Mother Jones: What’s the political message of your film?

Michael Franti: The film is not a film about political policy or people openly criticizing the Bush administration. It’s just a film about what it’s like living in war and how people get by. To me, the story of the heavy metal band in Baghdad that uses telephone wire in order to make guitar strings, or the kid whose legs have been blown off drawing a picture and smiling in some ways speak to the war more than listening to politicians rant.

MJ: To make this film, you have said that you brought your guitar and sought to travel with an open heart. What will it take for more Americans to experience the world like that?

MF: I really encourage people to travel so we can see how the rest of the world views our country. That’s really important. Secondly, as artists, activists, and citizens who vote, we have to begin to vote from our heart.

Recently I was reading a newspaper poll online that said 21 percent of Americans said that torture and degradation of prisoners is acceptable. I was astounded. We don’t see the images of what’s happening there, and until we do war is just going to be something that other people do somewhere else.

MJ: What ways can people move past the slogans to accomplish positive steps for peace?

MF: I can only speak to what I feel like I can do. We need to see what’s happening to people, and that’s why I made this film. I think that if we can begin to humanize the Iraqi people, the U.S. soldiers, the Palestinian refugees, the Israeli people, the Israeli soldiers—if we can begin to put a human face to all this, it will be like at the end of the Vietnam War—when we started to see the images of an eight-year-old girl running down a country road naked, burning from Napalm, and suddenly people around the world said, “It’s time to stop this.”

MJ: What did the Iraqis you met think about the Americans’ effort to bring stability to Iraq?

MF: With electricity that rarely works, water that has viruses in it, no jobs, people dying every day in violent ways, what surprised me was how many Iraqis believed George Bush. The people that I spoke to, they believed that Bush was coming here to liberate the nation. I would say 99 percent of the Iraqis that I spoke to were happy that Saddam was gone and grateful for that. They thought Saddam would be taken out and then America would leave and allow the Iraqis to govern themselves.

MJ: Based on your experience, what role do you think the U.S. can play or should play in relation to Iraq achieving stability now?

MF: While I was there, I gathered that there were three options that were available for the country. 1) America occupies Iraq infinitely. 2) Because of all of the ethnic and religious battles taking place for power, you do like what was done with India: you create a Kurdish state, a Sunni state, and a Shiite state—and everybody was dreading that, but it was something that people openly spoke of. 3) The United States create an international body of economic support, humanitarian relief, and assistance in creating an Iraqi security force that can help to restore order amid so much chaos.

The problem with that third option, which is to me the best, is that we did everything that we could—and when I say “we” I mean the Bush administration—to tell the rest of the world to fuck off leading up to the invasion; and now to go back and say, “Hey, we need your sons and daughters to now go into Iraq and face being killed; we need your money; we need your support to take care of this mess that we’ve created”—it’s a hard sell.

MJ: Are you hopeful the situation will improve?

MF: I have hope for the situation improving because I see change in America. When I first came back from Iraq, I traveled around the country playing music talking about my experience there, and people in some states just booed me. They said, “How dare you criticize or question the war?!?” Now, a year later, especially since Hurricane Katrina, people really question the direction of our nation: Do we want to be a country that puts all its resources into war and every day creates more enemies? Or do we want to be a nation that puts our resources back into our own country and pays attention to health care, education, economic sustainability, and environmental sustainability, and then, with the overflow, reaches out to other nations and ultimately creates more friends?

MJ: What were some of the differences you observed between life in Israel, Palestine, and Iraq?

MF: I went to Iraq because I wanted to see what one year of occupation had done to Iraqi society, and I went to the West Bank and Gaza Strip because I wanted to see what three generations of occupation had done to Palestinian society. I found a lot more hopelessness and despair in Palestine. I met people who didn’t have that vision, like Iraqis did, that their situation was going to change in the near future. You have people who feel stuck and live with this emotional and spiritual darkness hanging over them as a result of the occupation; and you also have people who live every day in fear of suicide attacks. So I met with people on both sides, who had lost family members, who had had their homes destroyed, and who were working to reconcile and create peace there. It was very inspiring to see the willingness of people on both sides to try to make the peace process move forward.

MJ: How often did you worry that that you might get killed or injured during this project?

MF: Every night before leaving I couldn’t sleep and kept playing scenarios in my head. One was an Islamic militant cutting my head off, and the other was being kidnapped by a CIA agent. When I got there, [it became clear] that I was not a big enough fish for the CIA to fry—they had much larger problems than me playing my guitar on the street—and [the risk] really just became being caught in the wrong place at the wrong time.

MJ: What were some of the biggest dangers you faced?

MF: Driving out of the Baghdad airport when we first got off the plane, there were two cars blown up coming into the airport—bodies inside them, the cars were still on fire. There were soldiers all around pointing their weapons in ready position. We tried to videotape it, and the driver, who we had just met, slammed the video camera out of our hands and said, “Don’t ever shoot any U.S. military operations, or else they’re going to open fire on our vehicle.” That was just the awakening.

MJ: How was it being a musician in these places?

MF: Traveling to the Middle East and playing music for people on the street, for soldiers, for people in hospitals, and for people who lost their homes, and seeing people open up through the experience of music really restored my faith in music, in art, and in culture to change things.

MJ: What’s that change going to look like in this country?

MF: I think that it’s going to be a mass awakening in this country that is ultimately going to lead to the removal of this administration and finds somebody who has a backbone to really stand up for human, natural, and spiritual interests of this country and this planet.