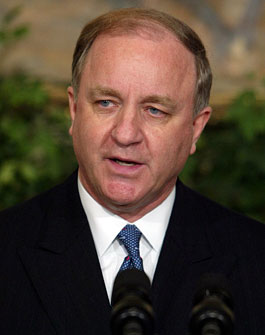 Americans concerned about global hunger, disease, and deprivation have long argued that our country should take leadership in providing development assistance to impoverished populations abroad. After 9/11, even more citizens pointed to foreign aid as a means to create strong international ties, promote democratic institutions, and build a safer world. That the U.S. should catch up with European countries, which provide much larger infusions of foreign aid relative to the size of their economies, seemed like a reasonable and timely demand.

As it turns out, we might want to be careful what we wish for.

Currently, the Bush administration is overhauling the structures through which the U.S. provides such assistance, and there are reasons to fear that the changes will not be for the better. Under the banner of “transformative diplomacy,” Secretary of State Condoleezza Rice is promising an aid program that is more overtly politicized than ever–one tied less to the ethical imperatives of alleviating poverty than to the White House’s short-term political and military objectives.

This month, the Senate has worked to confirm Randall Tobias as the new administrator of the United States Agency for International Development (USAID). Once promoted, Tobias, currently head of the White House’s Office of Global AIDS, will also be the first Director of Foreign Assistance. This position is a deputy-level post at the State Department that will report directly to Secretary Rice.

The administration is also moving USAID inside the State Department. The diverse programs that disperse some $19 billion in foreign assistance each year will be consolidated under the new director’s supervision. Streamlining bureaucracy can be a good thing, to be sure. But there are several problems with the changes.

The first is that Tobias’s record makes him the wrong man for the job at USAID. Before joining the Bush administration, Tobias was a major Republican campaign contributor who served as CEO of the pharmaceutical giant Eli Lilly & Co. There, he worked to counter demands for better access to generic AIDS drugs in the developing world by lobbying for corporations’ intellectual property rights.

As director of the Office of Global AIDS, Tobias received criticism from groups ranging from Planned Parenthood to Human Rights Watch for pushing a politically loaded, abstinence-based response to AIDS prevention in Africa. According to guidelines issued by Tobias’s office, two-thirds of the prevention money channeled this year through the President’s Emergency Plan for AIDS Relief must be directed to abstinence and faithfulness programs. The guidelines, first reported by the Baltimore Sun in December, have been publicized by the Center for Health and Gender Equity, which campaigned against Tobias’s appointment.

In a March 2004 Congressional hearing, Tobias went so far as to question the well-documented effectiveness of condoms in reducing transmission of HIV. He repeated his claims the following month, saying, “Statistics show that condoms have really not been very effective.” Such actions led the New York Times to write an editorial about Tobias’s promotion arguing that the ambassador “proved himself unable to resist pressure to abandon proven AIDS prevention strategies in favor of the abstinence programs supported by the religious right.”

Tobias’s propensity for injecting an ideological agenda into purportedly apolitical programs bodes ill for USAID. It may fit nicely, though, with the Bush administration’s larger goals for restructuring our country’s foreign assistance programs.

Since its creation during the Kennedy Administration, USAID has operated outside of direct State Department control. This allowed it to pursue long-term development programs that were not necessarily tied to the geopolitical priorities of any one president. In practice, of course, U.S. foreign assistance has always been politicized. During the Cold War, aid was expressly deployed as part of the fight against Soviet Communism. But the formal independence of USAID helped the institution value its staff members’ expertise in development over their ideological fervor.

However, in consolidating USAID under the State Department, the Bush administration is tying aid money to U.S. strategic interests in a far more overt manner. This is part of a wider trend. As Oxfam America argues, “[S]ince the attacks of September 11th there has been a drastic shift in U.S. foreign assistance that has blurred the lines traditionally separating development and humanitarian aid from political and military action.”

The paradigm of “transformative diplomacy,” unveiled by Secretary Rice in January, is the latest embodiment of this shift. It will include the redeployment of U.S. diplomats from Washington and European cities to countries in Asia and the Middle East. A main thrust of transformative diplomacy is a closer alignment of foreign aid with political concerns. Development advocates worry that this will mean that dollars for poverty- reduction programs will become conditional aid used as payback for allegiance from poorer governments–those countries sufficiently eager to join a “coalition of the willing” or to sign a “free trade” pact.

It’s not just outside critics who are concerned. In a meeting between the Secretary of State and USAID staff in January, employees bombarded Rice with questions about the political nature of the changes. Reporting on the meeting, the Boston Globe quoted an anonymous USAID official who at once defended Rice’s strategic plans and confirmed the worst fears of his co-workers: “He said the days when aid workers could set their own agenda, without concern for national security priorities, are over. ‘That’s a peacetime luxury,’ he said. ‘We’re a country at war.'”

Most Americans would be surprised to learn that, even in the best of times, very little of the money we direct to “foreign assistance” actually goes to health and education programs for the poor. The bulk takes the form of military aid and economic assistance for states with strategic importance, such as Egypt, Jordan, Iraq, Russia, Afghanistan, Pakistan, and Colombia. In recent years, an increasing amount of money has been shifted away from development and toward programs aimed to “strengthen democracy,” “encourage good governance,” or “promote economic reform.”

This type of rhetoric usually sounds fine, but the goals are vague and easily politicized. They can allow aid to be put to nefarious ends. In the case of the Millennium Challenge Account, one of the new programs created by the Bush Administration, a country’s “openness to international trade” is listed as one of the criteria used to select aid recipients. Openness is measured using an index provided by the arch-conservative Heritage Foundation. In Central America, leaders quickly got the message; observers in the region widely believed that receiving assistance from the account went hand in hand with supporting the controversial Central American Free Trade Agreement (CAFTA).

Likewise, the White House has often sold its reforms as efforts to promote effectiveness in foreign assistance–undoubtedly a worthy goal. But the case of AIDS funding, where the Bush administration went on to ignore the scientific data about effective prevention, has cast doubt on its sincerity. On a more general level, former Deputy Assistant Secretary of State for Africa Carol Lancaster recently observed to journalists that aid recipients such as Egypt that receive money for political purposes know that the U.S. won’t cut them off if funds aren’t used efficiently. Thus, they have little incentive to stem corruption.

Working to address U.S. security concerns is not an illegitimate goal of foreign assistance. However, the invasion of Iraq provides tragic illustration that when the Bush administration pursues long pent-up policy goals under guise of fighting terror, it can have disastrous consequences–and in fact make the world a more dangerous place. It gives us ample reason to be wary of aid programs used to buy or bully allies, and to be skeptical of arrangements in which health and education professionals must answer to White House political operatives or Pentagon planners.

The Bush administration’s current bureaucratic maneuvers do not mean that Americans should give up on the idea of foreign aid altogether. Real aid—long-term development assistance offered out of the belief that societies with less poverty, disease, and inequality are more likely to be healthy democracies—can contribute to creating a world that is both safer and more just. That’s what we want when we demand more funding for poor countries. That’s what too often went missing when aid programs were politicized in the past. And that’s what we’re even less likely to get under Randall Tobias.