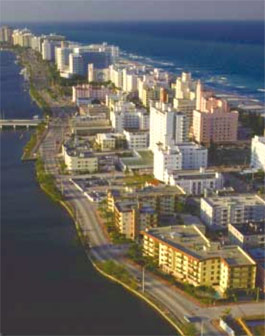 A: Development and tourism are fundamentally changing natural coastal ecosystems. Habitats, species, and whole ecosystems are threatened by the elimination of wetlands, the damming of rivers, and the stabilization of(inherently unstable) beaches and barrier islands. And the alteration of water flows, the loss of water quality, the breakup of large areas by roads, canals, and other infrastructure all harm wildlife habitat.

Q: How did this come about?

A: Growth in many Americans’ personal wealth along with cheap flood insurance have contributed to billions of dollars worth of real estate development in high-risk and environmentally fragile coastal areas. More than half the population of the United States lives in coastal counties, which comprise only 17 percent of the nation’s land area. Population density along the coasts is about five times the national average, and coastal population is expected to increase by another 20 percent by 2015. It’s estimated that 3,600 people move to the coasts each day.

Tourism is the second largest contributor to US GDP, and coastal tourism accounts for 85 percent of all tourism revenue. With tourism comes development, which in turn increases demand for housing, water, food, recreation, waste disposal, roads, and cars.

Q: What’s the most harmful impact of development?

A: The worse effect probably comes from polluted runoff. Transported pollutants can degrade water quality and habitats far from the sources of pollution. Surfaces impervious to water–paved roads, parking lots, rooftops–worsen the problem, affecting watersheds in two major ways: by altering the patter and rate of flow of rainwater to water bodies; and by collecting pollutants–hydrocarbons emitted by automobiles and pesticides and fertilizers from lawns and golf courses–and provide a conduit for their rapid transfer to water bodies.

Q: Are some areas more vulnerable than others?

A: Wetlands are particularly vulnerable. They support economically and ecologically important fish and wildlife populations, and provide ecological services by slowing down and absorbing stormwater, filtering pollutants from urban and agricultural runoff, and buffering coastal areas from storms and erosion.

From the 1780s to the 1980s, the US lost more than half of its original wetlands, overwhelmingly as a result of agriculture. Since the passage of the Clean Water Act and other statutes the rate of loss has dramatically decreased. Most wetland loss today is a consequence of residential and commercial development.

Q: What are some ways this problem could be addressed?

A: The Pew Commission’s 2003 final report on the oceans made these recommendations:

2. Identify and protect from development habitat critical for the functioning of coastal ecosystems.

3. Institute effective mechanisms at all levels of government to manage development and minimize its impact on coastal ecosystems and their watersheds.

4. Redirect government programs and subsidies away from harmful coastal development and toward beneficial activities, including restoration.