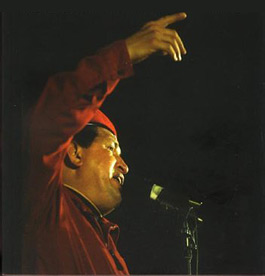 The people of Venezuela have gone to the polls 11 times in seven years. Almost a superfluity of democracy, some might think, and signs of electoral fatigue could be detected in Sunday’s elections for the National Assembly when only 30% of the electorate bothered to vote. The rest perceived the result as a foregone conclusion since in earlier elections President Hugo Chávez, or the candidates he backed, had stacked up substantial majorities. Sunday’s poll followed the trend, and the Chávez list wiped the board.

This time, however, the once vocal opposition was strangely absent. Four of the small opposition parties decided to withdraw at the last minute, in a cynical manoeuvre designed to upset the hard-won stability achieved since the recall referendum in August 2004 (engineered by the opposition to try to secure the president’s resignation). Handsomely won by Chávez with a margin of 59 to 41, the referendum was certified as free and fair by observers from the Organisation of American States (OAS) and the Carter Centre, but some of the opposition parties refused to accept the result. Their rejection did little to enhance their authority or popularity and when they withdrew from Sunday’s poll they knew that they faced defeat and humiliation.

Their action irritated the mission sent by the OAS which believed it had negotiated a settlement over opposition complaints about the new automated voting system. The opposition then turned turtle and announced its withdrawal. It was not acting alone. In the background, at private meetings on the island of Aruba in the Dutch Antilles and in public declarations by Thomas Shannon, the US secretary of state for Latin American affairs, the opposition had been elaborating a strategy to overthrow Chávez. Its plan was to make people believe that “democracy in Venezuela is in grave peril”, as Shannon put it to a Washington subcommittee two weeks ago.

It is indeed in peril, threatened by a tiny ragbag of opposition groups given disproportionate international influence through the support of the US. By their irresponsible electoral abstention, they hoped to undermine the credibility of the parliamentary system.

The US-backed strategy is to use apparently neutral non-governmental organisations to tell the world that the elections are not free and fair, that press freedom is under threat, and that human rights are not respected. These allegations are then exaggerated and amplified in Washington.

The complaints are nonsense. The opposition still owns most of the newspapers and television stations. The judiciary has been comprehensively reformed after the scandals of the previous decade when half the judges were found to be corrupt or incompetent. Elections have been endlessly vetted and human rights have been extended to the great mass of the people.

Washington continues to perceive the Chávez government, in Shannon’s words, as “a threat to regional stability”. The Americans dislike his revolutionary rhetoric, his friendship with Fidel Castro, his outspoken hostility to neo-liberal economics, his decision to buy weapons from a non-US supplier such as Spain and his support for radical movements in Latin America, such as the Movement Toward Socialism of Evo Morales, expected to win the presidential election in Bolivia later this month. Yet the US has few allies in the continent today, and the most important countries – Argentina, Brazil, and even Chile – are enlisted in the Chávez camp. Its alliance with the discredited Venezuelan opposition will gain it few new friends.

Almost everyone in Venezuela – including Chávez – recognises that the government would benefit from an intelligent and constructive opposition, and some within that opposition were once anxious to provide the electorate with a choice. Others, now in a majority, look towards an insurrectionary or violent outcome.

Yet Chávez is not a dictator as the Americans claim. He is a democratic revolutionary who has always had a magical capacity to turn the political mistakes of others to his own advantage. Now with an overwhelming majority in the new assembly, he will be able to adjust those clauses in the rapidly drafted ,yet generally admirable, constitution of 1999 that have been found inadequate (including the one that would prevent him from standing for a third term). There is every sign that he will win the presidential election next year and, who knows, the one in December 2012. The foolish action of the opposition will have been of immense assistance in that task.