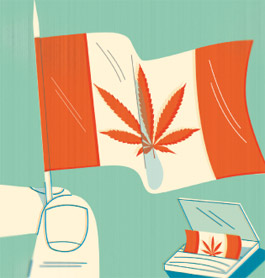 If you were the guy everyone called the prince of pot and the U.S. drug czar came to town rattling his saber, you’d probably have the sense to stay out of his way. At the very least, you wouldn’t go out of your way to antagonize him, let alone pay $500 for the privilege. But that’s exactly what Marc Emery did. Emery is a Canadian entrepreneur who presided over the world’s largest marijuana seed sales business. In November 2002, when John Walters came to Vancouver, Emery bought a table at a Board of Trade luncheon, invited nine friends along, and—after nearly tricking Walters into posing for a photo with him—mercilessly heckled the czar (whose speech warned the Canadians about the errors of their drug-tolerant ways) before heading outside to spark up a fatty.

In July, after 10 years of watching as Emery sent seeds across the border, webcast his antiprohibition rants from the HQ of the British Columbia Marijuana Party (“Overgrow the Government”) on Pot-TV, and mailed out Cannabis Culture, the bimonthly he edits, U.S. drug warriors finally struck back. Acting at their behest, the Canadian police busted Emery in Lawrencetown, Nova Scotia, where he was due to appear at Hemp Fest 2005, on a three-count indictment filed by the U.S. attorney’s office after an 18-month investigation by the Drug Enforcement Administration (DEA). Emery, 47, and two associates were charged with conspiracy to produce and sell marijuana, as well as money laundering—crimes that could carry life sentences.

I first met Emery just after the drug-czar incident and his second run to be Vancouver’s mayor. Swaggering through “Vansterdam,” the neighborhood of cannabis cafés and head shops that he helped establish, Emery seemed to have walked out of the pages of the Ayn Rand books he discovered when he was 21 (around the time he discovered pot) or the superhero comics he sold in his first business, started when he was 13. Both Howard Roark and Spider-Man, he told me then, “had this total obsession with doing the right thing. I really related to these misunderstood people who had so much power.”

This August, released on a $50,000 bond, he was still obsessed, speaking in his customary rat-a-tat about the “real reason” for his arrest: the millions of dollars he says he’s given to antiprohibition causes over the years. “My money went everywhere, spreading a revolution through retail,” he said. “It was the engine for worldwide activism against U.S. drug policy.”

“I’ve given his ‘movement’ no thought,” says Todd Greenberg, the assistant U.S. attorney in Seattle prosecuting the case. “Emery’s criminal activities are the only focus of this case,” he added, citing as justification the fact that 75 percent of Emery’s seeds go to American customers. But Greenberg’s attempt to distance Emery’s arrest from drug-war politics was undermined by Karen Tandy, head of the DEA. On the day of Emery’s bust, she proclaimed that it dealt a blow “not only to the marijuana trafficking trade…but also to the marijuana legalization movement,” whose lobbyists, she added, “now have one less pot of money to rely on.”

“She makes it clear that her objective was to cripple the movement,” says John Conroy, who leads Emery’s defense team and plans to use Tandy’s statement to fight his extradition. Under the Extradition Act, Canada is not obligated to surrender a citizen if to do so would be unjust or oppressive. (Canada limits sentences for cannabis production to a maximum of seven years.) Last year, Emery served 60 days for passing a joint at a concert, but Canada has largely tolerated his business—and taken his money: He pays about $80,000 a year in income taxes, listing “marijuana seed vendor” as his occupation on his return. Conroy believes Emery’s arrest is both personal (“It smacks of his being an effective pain in the ass to the drug warriors,” he says) and political—an attempt by the U.S. to signal its displeasure at Canada’s liberal drug policies. The country has legalized medical pot, is flirting with federal decriminalization, and was the first nation to approve a cannabis extract called Sativex for prescription use(see “Respectable Reefer”). Many Canadians agree—a poll found that 58 percent oppose Emery’s extradition, and the arrest, which was front-page news in Canada, triggered an avalanche of letters to the editor and op-eds criticizing what one columnist called “an outrageous infringement of Canadian sovereignty.”

Awaiting his extradition hearing (Conroy reckons the process will take years), Emery says he’s out of money and out of business. His website now offers grim warnings about an “escalation of the Drug War” instead of seeds of “White Widow” and “Diesel” varietals. But he seems certain that if he loses his extradition battle, it will be his ticket into the superhero pantheon. “The DEA is losing the war for hearts and minds. They figure they can wipe out the movement by getting rid of this one guy. They’re going to give life in Supermax to a guy who isn’t even in trouble with his own people,” Emery says. “They will make a martyr out of me.”