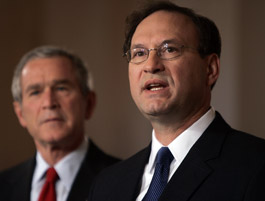 Article created by The Century Foundation

For anyone paying attention, it has been obvious for a long time that conservatives who claim that they support “judicial restraint” and oppose “legislating from the bench” mean no such thing. Those phrases—like “ownership society,” “personal accounts,” “tax relief,” “school choice,” “color-blindness,” “opportunity zones,” “devolution,” “streamlining government bureaucracy” and so on—are hollow sales pitches explicitly intended to mask an unpopular plan of action behind a misleading catch phrase that sounds beguiling. In each case, the agenda is invariably to roll back government and strengthen the hand of private interests. As Cass Sunstein noted a couple of years ago, “The Rehnquist Court has struck down at least 26 federal enactments since 1995—a record of activism against the national legislative branch.” (His outstanding book released this summer, Radicals in Robes: Why Extreme Right-Wing Courts Are Wrong For America, couldn’t have been timed much better).

Dahlia Lithwick’s Slate piece suggests that there’s a huge opportunity to educate the public about the difference between what conservatives say and how they act. She writes:

Alito is the kind of ‘restrained’ jurist who isn’t above striking down acts of Congress whenever they offend him. Bush noted this morning: ‘He has a deep understanding of the proper role of judges in our society. He understands that judges are to interpret the laws, not to impose their preferences or priorities on the people.’ Except, of course, that Alito doesn’t think Congress has the power to regulate machine-gun possession, or to broadly enforce the Family and Medical Leave Act, or to enact race or gender discrimination laws that might be effective in remedying race and gender discrimination, or to tackle monopolists. Alito thus neatly joins the ranks of right-wing activists in the battle to limit the power of Congress and diminish the efficacy of the judiciary. In that sense Bush has pulled off the perfect Halloween maneuver: He’s managed the trick of getting his sticky scandals off the front pages, and the treat of a right-wing activist dressed up as a constitutional minimalist.

There’s a pattern here that extends far beyond the courts. Conservatives say they want to strengthen Social Security, but they try to weaken it instead. Conservatives say they want to propose making agencies like FEMA more efficient by outsourcing its work, but they just gut it instead. Conservatives want judges who confine themselves to “umpiring,” but have just chosen a nominee to the Supreme Court who has repeatedly tried to rewrite the rulebook crafted by elected officials. Win or lose on this nomination, it’s another golden opportunity to connect the dots and show that modern-day conservatism has no interest in conserving anything.