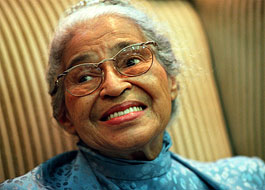 We learn much from how we present our heroes. A few years ago, on Martin
Luther King Jr. Day, I was interviewed on CNN. So was Rosa Parks, by phone from
Los Angeles. “We’re very honored to have her,” said the host. “Rosa Parks
was the woman who wouldn’t go to the back of the bus. She wouldn’t get up
and give her seat in the white section to a white person. That set in motion
the year-long bus boycott in Montgomery. It earned Rosa Parks the title of
‘mother of the Civil Rights movement.'”

I was excited to hear Parks’s voice and to be part of the same show. Then it
occurred to me that the host’s description–the story’s standard rendition
and one repeated even in many of her obituaries–stripped the Montgomery
boycott of all of its context. Before refusing to give up her bus seat,
Parks had been active for twelve years in the local NAACP chapter, serving
as its secretary. The summer before her arrest, she’d attended a ten-day
training session at Tennessee’s labor and civil rights organizing school,
the Highlander Center, where she’d met an older generation of civil rights
activists, like South Carolina teacher Septima Clark, and discussed the
recent Supreme Court decision banning “separate-but-equal” schools. During
this period of involvement and education, Parks had become familiar with
previous challenges to segregation: Another Montgomery bus boycott, fifty
years earlier, successfully eased some restrictions; a bus boycott in Baton
Rouge won limited gains two years before Parks was arrested; and the
previous spring, a young Montgomery woman had also refused to move to the
back of the bus, causing the NAACP to consider a legal challenge until it
turned out that she was unmarried and pregnant, and therefore a poor symbol
for a campaign.

In short, Rosa Parks didn’t make a spur-of-the-moment decision. She didn’t
single-handedly give birth to the civil rights efforts, but she was part of
an existing movement for change, at a time when success was far from
certain. We all know Parks’s name, but few of us know about Montgomery NAACP
head E.D. Nixon, who served as one of her mentors and first got Martin
Luther King involved. Nixon carried people’s suitcases on the trains, and
was active in the Brotherhood of Sleeping Car Porters, the union founded by
legendary civil rights activist A. Philip Randolph. He played a key role in
the campaign. No one talks of him, any more than they talk of JoAnn
Robinson, who taught nearby at an underfunded and segregated Black college
and whose Women’s Political Council distributed the initial leaflets
following Parks’s arrest. Without the often lonely work of people like
Nixon, Randolph, and Robinson, Parks would likely have never taken her
stand, and if she had, it would never have had the same impact.
This in no way diminishes the power and historical importance of Parks’s
refusal to give up her seat. But it reminds us that this tremendously
consequential act, along with everything that followed, depended on all the
humble and frustrating work that Parks and others undertook earlier on. It
also reminds us that Parks’s initial step of getting involved was just as
courageous and critical as the stand on the bus that all of us have heard
about.

People like Parks shape our models of social commitment. Yet from responses
to talks I’ve given throughout the country, most citizens do not know the
full story of her involvement. And the conventional stripped-down retelling
creates a standard so impossible to meet, it may actually make it harder for
us to get involved, inadvertently removing Parks’s most powerful
lessons of hope.

This conventional portrayal suggests that social activists come out of
nowhere, to suddenly take dramatic stands. It implies that we act with the
greatest impact when we act alone, at least initially. And that change
occurs instantly, as opposed to building on a series of often-invisible
actions. The myth of Parks as lone activist reinforces a notion that anyone
who takes a committed public stand, or at least an effective one, has to be
a larger-than-life figure–someone with more time, energy, courage, vision,
or knowledge than any normal person could ever possess. This belief pervades
our society, in part because the media tends not to represent historical
change as the work of ordinary human beings, which it almost always is.
Once we enshrine our heroes on pedestals, it becomes hard for mere mortals
to measure up in our eyes. However individuals speak out, we’re tempted to
dismiss their motives, knowledge, and tactics as insufficiently grand or
heroic. We fault them for not being in command of every fact and figure, or
being able to answer every question put to them. We fault ourselves as well,
for not knowing every detail, or for harboring uncertainties and doubts. We
find it hard to imagine that ordinary human beings with ordinary flaws might
make a critical difference in worthy social causes.

Yet those who act have their own imperfections, and ample reasons to hold
back. “I think it does us all a disservice,” says a young African-American
activist in Atlanta named Sonya Tinsley, “when people who work for social
change are presented as saints–so much more noble than the rest of us. We
get a false sense that from the moment they were born they were called to
act, never had doubts, were bathed in a circle of light. But I’m much more
inspired learning how people succeeded despite their failings and
uncertainties. It’s a much less intimidating image. It makes me feel like I
have a shot at changing things too.”

Sonya had recently attended a talk given by one of Martin Luther King’s
Morehouse professors, in which he mentioned how much King had struggled when
he first came to college, getting only a ‘C,’ for example, in his first
philosophy course. “I found that very inspiring, when I heard it,” Sonya
said, “given all that King achieved. It made me feel that just about
anything was possible.”

Our culture’s misreading of the Rosa Parks story speaks to a more general
collective amnesia, where we forget the examples that might most inspire our
courage, hope, and conscience. Apart from obvious times of military
conflict, most of us know next to nothing of the many battles ordinary men
and women fought to preserve freedom, expand the sphere of democracy, and
create a more just society. Of the abolitionist and civil rights movements,
we at best recall a few key leaders–and often misread their actual stories.
We know even less about the turn-of-the-century populists who challenged
entrenched economic interests and fought for a “cooperative commonwealth.”
Who these days can describe the union movements that ended 80-hour work
weeks at near-starvation wages? Who knows the origin of the social security
system, now threatened by systematic attempts to privatize it? How did the
women’s suffrage movement spread to hundreds of communities, and gather
enough strength to prevail?

As memories of these events disappear, we lose the knowledge of mechanisms
that grassroots social movements have used successfully in the past to shift
public sentiment and challenge entrenched institutional power. Equally lost
are the means by which their participants managed to keep on and eventually
prevail in circumstances at least as harsh as those we face today.
Think again about the different ways one can frame Rosa Parks’s historic
action. In the prevailing myth, Parks decides to act almost on a whim, in
isolation. She’s a virgin to politics, a holy innocent. The lesson seems to
be that if any of us suddenly got the urge to do something equally heroic,
that would be great. Of course most of us don’t, so we wait our entire lives
to find the ideal moment.

Parks’s real story conveys a far more empowering moral. She begins with
seemingly modest steps. She goes to a meeting, and then another, helping
build the community that in turn supported her path. Hesitant at first, she
gains confidence as she speaks out. She keeps on despite a profoundly
uncertain context, as she and others act as best they can to challenge
deeply entrenched injustices, with little certainty of results. Had she and
others given up after her tenth or eleventh year of commitment, we might
never have heard of Montgomery.

Parks also reminds us that even in a seemingly losing cause, one person may
unknowingly inspire another, and that person yet a third, who may then go on
to change the world, or at least a small corner of it. Rosa Parks’s husband
Raymond convinced her to attend her first NAACP meeting, the initial step on
a path that brought her to that fateful day on the bus in Montgomery. But
who got Raymond Parks involved? And why did that person take the trouble to
do so? What experiences shaped their outlook, forged their convictions? The
links in any chain of influence are too numerous, too complex to trace. But
being aware that such chains exist, that we can choose to join them, and
that lasting change doesn’t occur in their absence, is one of the primary
ways to sustain hope, especially when our actions seem too insignificant to
amount to anything.

Finally, Parks’s journey suggests that change is the product of deliberate,
incremental action, whereby we join together to try to shape a better world.
Sometimes our struggles will fail, as did many earlier efforts of Parks, her
peers, and her predecessors. Other times they may bear modest fruits. And at
times they will trigger a miraculous outpouring of courage and heart–as
happened with her arrest and all that followed. For only when we act despite
all our uncertainties and doubts do we have the chance to shape history.