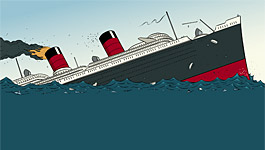 There’s been a lot of talk about cutting Social Security and Medicare. But without such social insurance what would happen to the elderly? We consulted a list of statistics we compiled in 2005. Most trend lines have only gotten worse since.

1/3 of the U.S. workforce has no savings set aside specifically for retirement.

Americans save only 1% of their disposable income a year. Germans and Italians save 11%.

72% of the private sector has no long-term disability insurance.

Twice as many workers and dependents are on federal disability as in 1990.

Only 21% of the private-sector workforce is covered by traditional pensions. That’s a 23% decline since 1988.

60% of private pensions are underfunded — to the tune of $450 billion.

Only 20% of the underfunding is at companies considered to be “financially weak.”

The federal Pension Benefit Guaranty Corporation faces a $96 billion exposure to funds that are “reasonably possible” to be defaulted on.

The PBGC has taken over 3,400 pensions, including those of Pan Am, Eastern, and TWA — airlines that all ultimately went out of business.

Three weeks after United stopped giving away BlackBerry PDAs with each round-trip ticket, it defaulted on $9.8 billion in pension obligations.

Because PBGC benefits max out at $45,614 a year, United retirees face $3.2 billion worth of pension reductions.

S&P 500 companies have an estimated $1.13 trillion in “off-balance-sheet” (OBS) pension liabilities that are hidden from shareholders and workers.

GM spends about $1,500 per car on employee health care — 3 times what it spends on steel.

Illegal immigrants contribute some $6 billion a year to Social Security and receive no benefits.

Social Security is the only source of income for 1 in 5 elderly Americans.

The number of workers who contribute to each Social Security beneficiary — 3.3 — is virtually unchanged since 1974.

According to the SEC, more than half of consulting firms that advise pension plans also work with money managers — conflicts of interest that cost pension funds between 10% and 15% of their assets.

In 1999, the SEC found that campaign contributions influenced public pension-plan investments in at least 17 states. Reform efforts were shelved amid opposition from the financial industry and elected officials.

San Diego was dubbed “Enron by the Sea” after officials raided the pension fund, increased benefits, effectively lowered retirement ages, and attempted to float a bond to pay for it all.

*By lowering life expectancy estimates, the Social Security Administration appears more solvent than it actually is

31% of Americans view caring for elderly relatives as “a serious concern.”

52% of Americans view being a burden to their family as “a serious concern.”

Senior citizens are thought to be half of all Indian casino clients, 80% during the day.