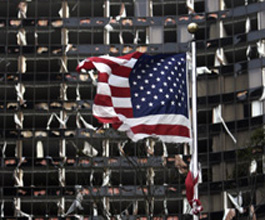 We’re told the 911 attacks changed everything for America–that they ushered us into a new and more dangerous world, where we could no longer afford old illusions. If we take its full lessons, the disaster of Hurricane Katrina challenges us even more profoundly.

If the comparison seems overstated, the death tolls from Katrina may well exceed the number of those lost at the World Trade Center and Pentagon. The projected cost of rebuilding New Orleans and its surroundings is now $25 billion and may even approach the $40 billion paid out by insurance companies worldwide related to the 911 attacks. And while New York City beyond the Twin Towers remained intact, a refuge to flee to and base from which to assemble emergency resources, New Orleans is a sea of desolation, a wet and desperate landscape with no place to hide. New York City and the national economy rebounded relatively quickly from the attacks.
The New Orleans projections are far grimmer.

911, we were told, required Americans to place unprecedented trust in their president and his advisors, and to scrap both longstanding rules of international law and domestic liberties. It justified a preemptive war against Iraq, and Bush’s reelection, despite all his failures. Of course it might never have occurred if the US hadn’t supported bin Laden to begin with, or if our policies hadn’t so embittered the Islamic world that a small number of men
were willing to murder 3,000 innocent people. But we’d all agree the attacks had a profound global impact.

So what are the lessons of New Orleans? We may call hurricanes acts of God, but Katrina was a level 1 storm, the lowest, until blistering temperatures in the Gulf of Mexico supercharged it to level 5. The storm’s virulence was related to global climate warming just as surely as the recent forest fires that ravaged Southern California, floods that covered much of Bangladesh, and European heat waves that killed 35,000 people two summers ago. Ironically, Mississippi Governor Haley Barbour played a key role, as an energy lobbyist, in convincing the Bush administration to break its campaign
promise to support limits on the carbon dioxide emissions that fuel global warming.

This disaster was fueled by more than global climate change. Engineers and software writers talk of “common mode failures,” where one mistake magnifies another and the cumulative impact is greater than all the separate parts. The New Orleans levees might never have been breached had the Bush administration not reversed Clinton administration policies prohibiting development of coastal wetlands that once buffered the impact of storms. The levees might have been buttressed and repaired had the administration responded to a 2001 FEMA study warning that a hurricane striking New Orleans
was one of the three most likely disasters in the U.S. But instead of
honoring the Army Corps of Engineers’ request to strengthen and renovate levees and pumping stations, the Bush administration cut the flood control budget of the New Orleans Corps of Engineers by $71 million, 44 percent of its budget. They needed the money for the Iraq war and to give $130 billion a year of tax cuts to a tiny group of wealthy Americans.

Finally, this catastrophe built on the slow-burn disaster that’s been
hitting America’s poorest communities for decades. The wealthy and
comfortable could evacuate New Orleans and did, though their lives were severely disrupted. But in one of the nation’s poorest cities, vast numbers of citizens had nowhere to go, no transportation or money with which to leave, and no friends or relatives with extra space to house them. They are the people left desperately trying to get out, while the helicopters and resources of a third of the Louisiana National Guard are deployed in Iraq. And they will be the ones most damaged and most forgotten when the floodwaters eventually recede.

We’re told we had to change in the wake of 911 or face future terrorist attacks. I suspect there will still be more attacks on American soil, following London and Madrid, and that our Iraqi invasion makes this far more likely. But it’s also probable that unless we change, New Orleans will not be the last of America’s great cities to collapse in desperation and ruin. Immediate relief efforts are critical, but we also need to address root crises: global warming, runaway development, deterioration of critical infrastructure, and a malign neglect that leaves more and more Americans poor and desperate.

A year ago, the world’s second largest reinsurance company, Swiss Re, warned that the economic costs of climate-related disasters threatened to reach $150 billion a year within ten years. We’re already seeing storms of exceptional virulence accompanying the heating of our oceans by a single degree. What will be the level of destruction as global temperatures continue to increase?

The development patterns that destroyed Louisiana wetlands are being repeated throughout America, with the support of an administration intent on removing all limits on private economic activity. The aging levees are part of a deteriorating national infrastructure that will take billions of dollars to address. The poverty that leaves people helpless to respond to disasters of whatever kind continues to grow, accelerated by government policies that transfer resources away from the poorest.

911 may have indeed changed our world forever, though I think we’ve drawn the wrong lessons. We now have a chance to heed those of New Orleans and Katrina, with consequences potentially far worse if we don’t. It’s up to us how we respond to the power of this warning.