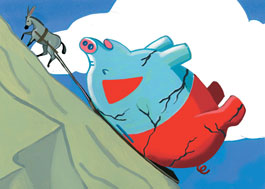 ON MARCH 3, 2004, Senator Hillary Clinton issued a dire and now familiar warning about the deficit: “If we look down the road, whether it is next year or two years from now, I think it is absolutely clear that we will see private capital crowded out of the capital markets because of the increasing need to feed the government debt. We will see interest rates rise…and we will be on a path to even further economic decline….”

Shouldn’t this be enough to raise a question? Are budget deficits really as evil as so many economists, journalists, and Democratic leaders presently claim? There was a day when Democrats did not think so. Franklin Roosevelt cured his urge to balance budgets during the early New Deal and spent his way out of the Depression and to victory during World War II. In June 1962, John F. Kennedy addressed the budget myths of that moment with balanced wisdom: “Debts public and private, are neither good nor bad, in and of themselves. Borrowing can lead to overextension and collapse — but it can also lead to expansion and strength. There is no single, simple slogan in this field that we can trust.”

But JFK’s enlightened moment didn’t last. Although Lyndon Johnson delivered a full employment surplus in 1969, he and the Democrats took the blame for earlier “Vietnam deficits” — and they got blamed for inflation. Later, Jimmy Carter was tarred by stagflation, again blamed on deficits though, in fact, Carter was a tightwad, and the deficits were caused by the oil shocks and other events beyond his control.

In 1980, Carter withdrew his own budget, promising a new one that would be “balanced.” Voters reacted by electing Ronald Reagan on a platform of large tax cuts. Soon deficits of more than $100 billion appeared. I remember well — for I was executive director of Congress’ Joint Economic Committee at the time — how the remaining fiscal activists among top Democrats then converted, almost en bloc, to “fiscal discipline.” What better way, they thought, to bash Reagan while appealing to conservative virtue?

It didn’t work. Reagan’s deficits were a success, delivering a stable recovery and his landslide in 1984. This time it was the Republicans who learned nothing. In 1992, the clueless George H.W. Bush tightened budgets in a recession, breaking his own promise not to raise taxes. Bush’s virtue was greatly praised, but not by the voters.

The beneficiary, Bill Clinton, advanced an early strategy for strong growth, involving more deficits at first — a spending program to end the recession — but less later on. But Clinton soon buckled to the anti-deficit crowd, switching in 1993 to a program of higher taxes, which set the stage for the GOP’s crushing midterm victory of 1994.

It’s true Clinton then got lucky. The economy grew anyway, producing growth, jobs, stable prices, Clinton’s reelection in 1996, and prosperity through the end of the decade. This was good for the country — but a disaster for Democratic politics. It fostered the myth that Clinton had found a magic formula, good for all times, a final refutation of the pro-deficit views of John Maynard Keynes. By the millennium, high officials were saying foolish things, including that by staying on course the entire federal debt could be retired within 15 years.

But Clintonomics worked only because of circumstances that will not soon be repeated. After 1996, companies and households stopped saving — indeed, they started spending well beyond their incomes. This gave the economy the stimulus that government had not provided. It then led to the technology boom, which attracted massive investments from around the world. This couldn’t last, and it didn’t. Though growth continued a few months past the NASDAQ’s implosion, even past the 2000 election, it would have ended even if President Al Gore had taken office in January 2001.

So George W. Bush, like Reagan, came in with a recession. And Bush’s tax cuts and military spending increases — the latter locked in by 9/11 — followed Reagan’s pattern. In 2003-04 Bush signed every appropriation Congress sent up, spending his way out of recession with war and pork. The IMF’s chief economist called it the “best recovery money can buy.” As always, leading Democrats decried the fiscal irresponsibility. As always, the voters assessed the results. With a narrowly effective Keynesian program, Bush won a narrow victory in 2004.

Still the Democrats have not learned. They remain a party obsessed with budget deficits. The press, if possible, is even worse, screaming at Bush for the one economic crime he did not commit, while ignoring most of the others.

Here’s the reality: The budget deficits up to now could not have been avoided. The 1990s boom could not have continued, and any president would have cut taxes and raised spending in the slump that followed. Bush’s tax cuts were skewed to the rich — Republican tax cuts always are. But viewed in the short run, the components of his stimulus package were well sized and well timed.

It’s true that the long-term features of Bush’s tax cuts are destructive. They benefit a misanthropic plutocracy, transferring tax burdens from the rich to the middle class and from the feds to the states and cities. The proposed permanent repeal of the estate tax, especially, is a social disaster, a blow to the very charities that Bush wants to deliver the social services once provided by government. But while Bush’s cuts for the rich should be repealed or allowed to expire, reducing future deficits is not the reason.

What is the cost of running a federal budget deficit? In Kennedy’s day economists said “inflation” — but there was none then, and apart from oil prices there’s little now. Today’s experts say “high interest rates” — yet a recent New York Times editorial pronounced long-term rates to be “abnormally low.” Alongside many economists, Senator Clinton says that deficits crowd out private capital investment. But the investment share of GDP is currently a full percentage point above its 60-year average. The real costs of this bogey are remarkably hard to find.

The real costs of “fixing it,” with immediate tax increases and spending cuts, including to Social Security, are immediate and large. They include falling living standards, rising poverty, reduced medical care, and perhaps a new recession. Recent bad production news suggests that this may not be far away in any case. Large though today’s deficits are, dealing with a falling economy could demand bigger deficits, not smaller ones, quite soon.

The real reason to restore the tax code is to generate revenues fairly, giving a future Congress the nerve to address the many problems facing the country, such as energy dependence, global warming, joblessness, health care, education, and homeland security. Every dollar spent on these problems will add to deficits. But solving them is more important than cutting deficits, just as it is more important than preserving tax cuts for the rich.

Finally, there is a little-understood economic point. Budget deficits and the trade deficit are linked; except during deep recessions and explosive booms, they tend to remain approximately equal. The trade deficit has been with us for three decades, and there are only two ways to fix it. We could, of course, abandon free trade, restrict oil imports, and rebuild domestic industry — a course that would involve steep cuts in living standards and a break with Japan and China (which would prompt them to, among other things, sell their U.S. government bonds). If things went wrong, world depression could result — maybe world war.

A better way would be to expand exports. But that would require rebuilding the stable world financial system that once funded advanced exports to Latin America, Asia, and Africa. That system was destroyed by the oil shocks of the 1970s and by the high interest rates and debt crises of the 1980s. To rebuild it now would require a very high order of international statecraft, combining trade, aid, debt relief, and financial regulation — no easy task. Either way, the budget deficit cannot be cured so long as the trade deficit remains as large as it is. Get used to it.

Our problems are large, hard, and expensive. Sure, it’s tempting to boil everything down to a slogan. But, let’s face it — in that temptation there’s a trap. Whining about deficits has never won an election. That’s the best reason for Democrats to stop whining. Who knows? Maybe someday the voters will come to admire them for it.