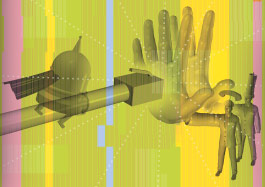 ONE DAY IN THE FALL OF 2004, Mike Simon was interrupted by a phone call that he still remembers well. The caller was a pollster, who asked a dozen or so questions related to the local government’s plan to build a broadband network. The questions became increasingly annoying. Then came the kicker: “Should tax money be allowed to provide pornographic movies for residents?” the caller asked. “It was just blatantly a push poll,” says Simon, a landlord and entrepreneur in a Chicago exurb called the Tri-Cities. “When I asked, ‘Who are you representing?’ they just hung up.”

That pollster, it was clear, was part of the strong resistance that had mobilized against the community’s broadband plan. The Tri-Cities, like hundreds of other cities and towns around the United States, had had difficulty getting high-speed, high-quality, competitive Internet service from the major providers. So, like other cities, it came up with a solution, and in the process aroused the attention of giants—the incumbent broadband providers SBC and Comcast.

The term “broadband” refers to high-capacity data networks, often made up of fiber-optic cables that run through underground pipes. The central nervous system of today’s communications systems is built of these high-speed cables, which deliver everything from HBO and ESPN to phone calls, DSL, and cable Internet access. The core of that network has been in place for years, but many of the extremities extending to more distant communities have yet to be constructed. Companies that own the infrastructure have been making money in densely populated, upper-income areas where they can win lots of customers per mile of cable. But they’ve dragged their feet when it comes to reaching markets they consider less lucrative.

In the places they do serve, companies like BellSouth, Qwest, and the local phone companies are often essentially alone in the DSL or cable markets and charge fat, monopolistic fees. In Iowa, for instance, where Iowa Telecom has skimpy competition, users pay $169.95 for their monthly service, compared with a typical fee of $40 in New York City, where upward of six providers compete for high-speed customers. Half of rural households say they don’t have high-speed Internet access because it’s either unavailable or too expensive.

Yet even as the corporate leviathans have neglected outlying areas, they’re waging fierce battles to prevent local governments from filling the gap. By the time the Tri-Cities fight was over, in late 2004, citizens like Simon were shocked by the hardball played by SBC and Comcast in staking out Tri-Cities turf. “This was the epitome of corporate greed,” says Simon, “where you have big companies trying to put one over on the little people.”

Founded more than 150 years ago along a scenic stretch of Illinois’ Fox River, the Tri-Cities–Geneva, Batavia, and St. Charles–are in many ways the heart of the mythical American heartland. Affluent and Republican, they offer excellent schools, civic pride, safe streets lined with Victorian houses. When Batavia wanted a brick walkway along its riverfront, citizens volunteered eight years of weekends to lay one. The cities each run publicly owned electric utilities, and the locals boast about low rates and reliability.

That spirit of self-reliance inspired the local broadband effort that came to a head in 2003. Forty-five miles west of Chicago, the Tri-Cities (population 75,000) host several sizable employers like Suncast Corporation, Flinn Scientific, and the Fermi National Accelerator Laboratory. But when it came to the info-superhighway, the cities were in the deep woods. Geneva’s City Hall fielded almost daily complaints from people frustrated with slow Internet access. Small businesses were paying as much for T1 lines (which deliver data roughly at the speed of a cable modem) as they were paying for rent, and citizens were stuck trying to cram megabytes through dial-up connections. Being in the Midwest, people were familiar with the fate of 19th-century towns that were bypassed by railroads: “They just shriveled up and disappeared,” says resident Annie Collins.

The Tri-Cities’ citizens took action. Their public power utilities had already started to dig up the streets and install fiber-optic cable for their own purposes—to read meters remotely, for instance, and monitor their piece of the grid—so residents decided to extend that network to homes and local businesses. The new lines could deliver telephone, cable television, and ultra-high-speed Internet access. The cities would have costs to cover, but free from profit pressure, officials reasoned, they could offer cheaper service on a state-of-the-art network that would help the local economy. They looked at the example of Thomasville, Georgia, where the municipal broadband system serves 70 percent of the market and uses its income to fund city services and avoid property taxes.

The idea had support from unlikely quarters, such as the Batavia Chamber of Commerce, whose members included Comcast and SBC. “Typically, chambers of commerce would not favor governments getting involved in an enterprise that could be handled by private industry,” says Roger Breisch, the chamber’s executive director. “In this particular case, members needed high-speed access, and it simply wasn’t available,” so the chamber supported the plan. The only hurdle was to hold a referendum, required by Illinois law. Then “all hell broke loose,” says Geneva’s Mayor Kevin Burns. “Fear and trepidation were delivered en masse” by SBC and Comcast.

Campaign signs appeared. Postcards, door hangers, and direct mail proliferated, exhorting citizens to reject the “Broadband ‘Property Tax Increase’ Referenda.” At the train station, smiling corporate representatives handed out spill-proof mugs of hot coffee emblazoned with the Comcast logo. Comcast mailed tens of thousands of custom-printed greeting cards pledging the company’s dedication to the community and ran prime-time advertisements (an efficient tactic if you control the local TV network) tarring municipal broadband as a taxpayer crapshoot. SBC billboard trucks trolled among the Victorians. Retired SBC employees and “concerned locals” were bused in from Chicago to knock on doors and persuade residents that SBC jobs and pensions were at stake in the referendum. Marching in lockstep against the Tri-Cities plan, the two otherwise competitive companies flooded the local newspapers with ad dollars, buying up as much as four pages a day. Nearly every household got the same push poll that Mike Simon answered, spreading fears that the Tri-Cities government could check users’ email and that school budgets might be cut to pay for the system. Some pollsters told residents that the city itself had sponsored their poll.

For their part, city officials were hamstrung by Illinois ethics regulations that restrict public employees from using their offices to campaign on behalf of referenda. So Annie Collins—a thirtysomething former flight attendant with a strong Erin Brockovich streak—ended up fighting virtually alone. In the corner of her dining room, after dropping the kids at school, Collins loaded her website with information debunking SBC and Comcast’s claims. But her budget of $4,300 was no match for the gargantuan telcos, which reported expenditures of more than $300,000 for the second referendum alone, not including staff time and TV ads.

The companies’ main claim was that municipal broadband was a dangerous gamble. According to SBC, this argument was based in part on the work of the Heartland Institute, a libertarian think tank that produces position papers on issues that affect deep-pocketed companies. (Heartland alleges, for example, that the “campaign against smoking is based on junk science.”) On the subject of municipal broadband, the institute held that “most operate at a loss,” but Heartland’s president, Joe Bast, admitted in an interview that he never studied enough cases to show this was true. Temple University academics, in contrast, who recently completed a broad-based study, contend that it’s too early to tell how well the systems will fare financially. And for many municipalities, profits are moot; they see the service as infrastructure no different from streetlights or sewer lines.

Through Heartland’s reports and Comcast’s ads, Tri-Cities residents learned that Tacoma, Washington’s Click! municipal network was a financial fiasco that prompted electric power administrators (who operate the network) to impose a 50 percent surcharge on customers’ electric bills. That was misleading, at best. The utility did impose a surcharge, but it was related to a different corpo- rate hijacking: the Enron-linked rolling electrical blackouts. Click!’s accountant confirms that the network is financially on track, with a positive cash flow after taxes, and a net loss of about “$10 per Tacoma resident per year if you include depreciation.” Click! has also delivered on its larger promise—to make the city more livable. By drawing new businesses, such as Expedia and Amazon, Click! has helped revitalize the downtown.

Why were SBC and Comcast spending hundreds of thousands of dollars preventing a Tri-Cities scheme they thought wasn’t feasible anyway? Comcast declined to comment for this article, but SBC spokeswoman Andrea Brands says her company was merely playing a “civic role” in educating the voters and newspapers about the risks. “We welcome competition. We try to be a good neighbor,” Brands says.

“That makes me shiver,” says Mayor Burns. “Civic responsibility is engaging in a civilized debate, not in an underhanded, disrespectful, and disreputable campaign.”

Communications companies like Comcast are also taking the local fight to the statehouse and to Congress. Fourteen states, heavily lobbied, have passed restrictions that either encumber municipalities looking to get in the broadband game, or prohibit their involvement outright. Philadelphia, which is launching an ambitious project to cover its entire 135 square miles with cheap wireless access, barely snuck by a 2004 Pennsylvania law prohibiting cities and towns from offering the service without giving the local telephone company a first option. This year the industry is supporting legislation in five more states, and in Washington, D.C., negotiations have begun on a rewrite of the mammoth 1996 Telecommunications Act—another opportunity for lobbyists to push restrictions.

These laws are potent. “Thousands of communities that don’t have DSL won’t have the opportunity to provide for themselves,” says Ben Scott of the media advocacy group Free Press. “So rural and low-income Americans who find themselves on the wrong side of the digital divide today will have to continue to wait until corporate America gets good and ready to connect them.”

Ultimately, in the Tri-Cities, Comcast and SBC defeated both referenda, winning between 53 and 60 percent of the vote. Nevertheless, many residents argue that the com- munity won in the end: Threatened by the specter of competition, both companies vastly expanded their broadband reach in the Tri-Cities, and citizens now have the access they wanted. “Just putting it on the ballot,” says Illinois Lt. Gov. Pat Quinn, “woke up these sleeping companies to the fact that the customers weren’t very happy.”

Yet, although residents did get their broadband, they got no control over it—over pricing, growth, or financing. And Comcast— with a near-monopoly on the area’s cable TV service—jacked up its basic cable rates after the referenda, for an increase of more than 30 percent since January 2003.

More than that, though, the companies quashed a promising experiment in civic life. And that has its own effects. “They spent a lot of money,” says Quinn, “trying to scare the daylights out of folks.”