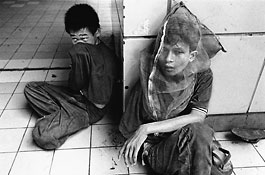 The suffering of children—whether from the afflictions of poverty, disease, or war—tends
to be regarded as a greater offense to conscience than the suffering of their elders. But why? Is
starvation, say, worse for a child than for a grown-up? And what of being shot? Is a youngster’s
agony necessarily greater? Such a claim appeals less to reason than to sentiment—and at its
core is the notion that the comparative innocence and defenselessness of children amplify any
harm that befalls them. In other words, it is in the eye of the beholder that the suffering
of children appears greater. That’s why, as any charity fundraiser knows, the image of a wide-eyed
tot is a far superior opener of wallets than that of a wizened geezer.

Children do not create the conditions of their plight, which is another reason
they are represented as universal victims. Their lack of responsibility for the crises they endure
and have come to symbolize makes us feel that it is not too late—if we can only rescue them—to
undo the damage. According to this conventional moral calculus, a wrong or harm suffered
by a child shames us by serving as a reminder that we—adults—have failed to protect our
young. So we are more distressed by the suffering of children because their woe reflects poorly
upon us as a species.

To judge by the latest annual report of the United Nations children’s
agency, “The State of the World’s Children 2005: Childhood Under Threat,” human
beings are sorry animals indeed. UNICEF warns that the number of children afflicted by hunger, sickness, violence, and the myriad deprivations
of body and soul that come with extreme poverty is growing steadily (the report claims the number
is now a billion) and that efforts to reverse these trends are sorely insufficient. And if children
cannot be blamed or credited for their condition, then this report is really an account of the ways
that grown-ups are making a hash of the world—particularly by allowing inequality to increase
and intensify of late.

For many throughout the postcolonial world, the struggle to enter the modern global economy has
resulted in more extreme poverty, deteriorating public health, and an escalation of armed conflict.
You don’t have to subscribe to the notion that children suffer more from these things than
their parents to recognize that the young present a particularly vivid mirror of the social distress
they inhabit. The homeless, glue-sniffing street children James Nachtwey found and photographed
in a Jakarta train station are hardly an anomalous phenomenon of some Indonesian netherworld.
Children like them are ubiquitous throughout the urban slums of Asia, Africa, and Latin America—the
lost souls heaved up and stranded by massive social and political transformations. Indeed, it
is possible to view the plight of Nachtwey’s subjects as evidence of Indonesia’s prosperity—because
it was the economic boom of recent years that lured the rural poor to seek their fortunes in the cities,
and it was in this migration that a good number of children got lost and fetched up in ghostly bands
to haunt the rising nation’s rush hours.

The children Nachtwey came to know over the last six years at the Mangga Besar
(Big Mango) train station forged their own society. They survived by begging and, when that failed,
by stealing—on a small-time, subsistence level—and they sniffed glue not only to get
high but also to allay their constant hunger. “They were truly outcasts, surviving on the
narrowest of margins, and as such were virtually invisible,” Nachtwey says. In exposing
themselves to his camera, they made themselves seen. They were not, however, looking to return
to the society that had abandoned them. When shopkeepers complained of their presence on the sidewalk, the police would round them up and send them to social services homes
for street kids, but, Nachtwey says, “Despite the guarantee of security, a clean, relatively
comfortable place to sleep, and a couple of decent meals each day, the children dreaded such places.
The kids had become essentially wild, and as addicted to freedom as they were to glue.”

These children didn’t choose the kind of freedom to which they have
become hooked.

It was thrust upon them, and they fashioned it in their own image. In their
outcast way, they’ve taken responsibility for—or claimed control of—their
damaged lives, such that it may now be impossible to “save” them. Their way of life drastically
reduces their chances of surviving into adulthood, and for that reason the image they present makes
a special appeal to conscience. But surely, if they do make it out of childhood, that appeal should
not be diminished.