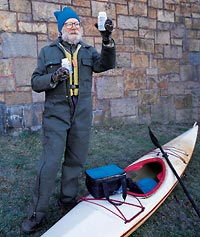 Walking the Boston side of the Charles River, a few feet from the cars streaming off Storrow Drive, Roger Frymire turns and plunges through a screen of trees and down the bank. Joggers and bicyclists, bundled against the winter cold, barely spare him a glance, as if middle-aged men leap off the sidewalk every day to hunch down and stare at the river.

What has Frymire transfixed isn’t the water itself, but a drainpipe—Boston Water and Sewer Commission Outfall No. 34, to be precise—jutting out inches below the surface. The pipe funnels storm water off a nearby street and, by the dictates of the federal Clean Water Act, should never contain raw sewage. But Frymire has twice sampled water here containing 10,000 times the legal limit for fecal bacteria. He’s even watched the pipe discharge “objectionable floatables”—a term best not explained in detail.

Today, he sees nothing unusual at first. “Maybe they fixed it,” he mutters. Then, as if on cue, a tropical-green cloud billows from the pipe. “Well,” he says, straightening up, “it’s less than I’ve seen. But it’s an indication that we’re still not done here.”

Frymire may be a lone citizen-activist, but thanks to an uncanny sense of smell and a singular determination to halt the flow of sewage into the watershed, this water watchdog has had an outsized impact. To a few exasperated local officials Frymire has become known as “the Mad Kayaker,” a muckraker (all too literally) who braves the Charles in all seasons to monitor polluting pipes—even if it means using his paddle to crack through the winter ice. But the roughly 2,000 water samples he’s taken throughout the region—which he turns over to an EPA lab for testing, following exacting protocols—have spurred public works departments in Boston and its suburbs to clean up dozens of problem pipes. “Roger has changed water quality on the Charles,” says Kathy Baskin, a director at the Charles River Watershed Association.

Hundreds, if not thousands, of drainage pipes spill into this urban river, and the region’s cash-strapped municipalities are incapable of monitoring them all. The feds are hardly better off. Bill Walsh-Rogalski, the EPA’s water-quality point man for New England, says he has the equivalent of one full-time employee monitoring the 300-square-mile Charles watershed. “The beauty of Roger is that he’s on the river all the time, and he can sniff out these problems,” says Walsh-Rogalski. “That’s what we can’t do. We don’t have a cop on the beat. He’s the cop on the beat.” This dearth of clean-water cops is a concern beyond New England: According to the EPA, 80 percent of the nation’s waterways never receive any comprehensive testing, a fact that Don Elder, president of the clean-water action group River Network, calls “a national disgrace.”

Frymire prefers working in cooperation with local authorities, but when alerting them to a problem isn’t enough to get it fixed, he calls in the big guns. Using Frymire’s data late last fall, the EPA cited four towns—Newton, Waltham, Brookline, and Watertown—for violations of the Clean Water Act. The municipalities have until this spring to repair the problems or face fines of up to $12,500 a day.

Frymire’s data-driven approach is what you might expect from a retired computer scientist who trained at MIT. The 48-year-old Texas native took up kayaking a decade ago to find refuge from city life. “One of the few places you can get away from people around here,” he says, “is out on the water.” Frymire had a tougher time escaping Boston’s unpleasant smells. One sunny day in 1996 he followed a stench of sewage—and then a trail of brown lumps—for two miles to a pipe near MIT. Ever since that first discovery, Frymire says, snuffing out sewage in the river has become part of his life’s work: “It’s something that needs to be done, and nobody else was doing it.”

Besides, Roger Frymire seems to have a gift. “Some people say my nose is outstanding,” he says. “I say it’s normal. Most people just don’t go out sniffing.”