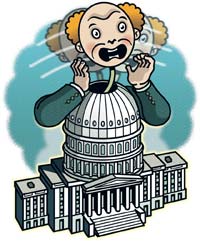 Rep. Curt Weldon (R-Pa.), who announced that he’d single-handedly exposed a plot by Iranian terrorists to fly hijacked Canadian airliners into a New Hampshire nuclear reactor. He was blown off by the CIA after his main source—whom Weldon himself gave the super-secret spy name “Ali”—refused to reveal his sources. “I took this straight to the top,” Weldon whined, “but I did not get anywhere.” After Republican colleagues joined in on ignoring him, Weldon announced he’ll reveal the plot in a book-length exposé that will “shake Washington.”

Rep. Katherine Harris (the very same), who exposed a nonexistent plot by a man of Middle Eastern heritage to blow up the power grid in Carmel, Indiana—a suburb of Indianapolis. She said “a mayor” had told her about it, although Carmel’s mayor said he didn’t know what she was talking about. Neither did the county sheriff; neither did the FBI.

Sen. Jim Bunning (R-Ky.), who insisted on having two local police officers guard him every time he traveled in the Bluegrass State. Although Bunning was always cagey about why, one local paper reported that the “Paducah police were with him to guard against al-Qaida or other terrorist attacks.” Bunning reacted with paranoia when queried about the preposterous assumption that terrorists might hunt him down in Paducah. “There may be strangers among us,” he explained.

Sen. Mark Dayton (D-Minn.), who evacuated his Washington office just before the November election, citing a “top-secret intelligence report” that the nation’s capital was in peril. The Department of Homeland Security issued a statement saying Dayton didn’t know what he was talking about, as did the U.S. Capitol Police. No matter; Dayton closed up shop, explaining: “I do so out of extreme, but necessary, precaution to protect the lives and safety of my Senate staff and my Minnesota constituents, who might otherwise visit my office in the next few weeks.”

AND THE WINNER IS…Katherine Harris, who later apologized, sorta, saying, “I regret that I had no knowledge of the sensitive nature of this situation,” adding that “the story” she had shared “illustrated the need for each of us to remain alert and vigilant in fighting terrorism.”