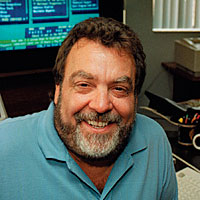 The idea came to him while sipping a martini. It was September
13, 2001, and Hank Asher was sitting in his $8 million home in Boca Raton, Florida, seething over
the terrorist strikes. Asher, creator of advanced data-processing software, suddenly realized
he could program his company’s computers to hunt Al Qaeda members hiding in the United States.

Within a day, Asher’s new program had sorted through 30 billion records—public and private—that his company, Seisint Inc., had obtained over the years.
The result? The names of 419 people he believed the government should investigate. He invited state
and federal agents to his office to review his work, and they were amazed: The FBI was already investigating
five names on the list, and a sixth turned out to be one of the hijackers. The agents became fixtures
at Seisint’s Boca Raton headquarters, helping Asher to develop a terrorist profile. The program
then culled through databases, rating millions of people for terrorist potential
according to a combination of factors including: age, gender, ethnicity, criminal record, credit
history, how they shipped or received packages, anomalies in Social Security numbers and driver’s
licenses, and addresses within the vicinity of known terrorists. Within weeks, the system had
a list of 120,000 names with High Terrorist Factor (HTF) scores.

Three years later, Asher’s brainchild has blossomed into the MATRIX—the
Multistate Anti-Terrorism Information Exchange, a network of state databases subsidized by
the Department of Homeland Security and the Justice Department. While Seisint provides its databases,
technology, and facilities for the project, the Florida Department of Law Enforcement and a nonprofit
research institute in Florida manage the day-to-day oper-ations. Law enforcement agencies in
four other states—Connecticut, Michigan, Ohio, and Pennsylvania—are enrolled in
the project, which allows them to conduct searches for criminal investigations in return for putting
their own databases into MATRIX. Although a number of states have withdrawn from the program, citing
administrative costs, Florida governor Jeb Bush, a strong backer of MATRIX, is working to recruit
more.

The American Civil Liberties Union, however, wants to eliminate federal
funding for MATRIX. “They are searching through disconnected records, which may not be accurate, looking for
patterns and drawing conclusions about people,” says Barry Steinhardt, director of the
ACLU’s Technology and Liberty Project. “One conclusion they drew is that there are
120,000 suspected terrorists in the United States. If there are 120,000 terrorists in America,
then we are in much deeper trouble than anyone ever imagined.” Even worse, the list has never
been made public, meaning that thousands of people are unaware that they have been singled out as
potential terrorists.

Steinhardt notes that federal officials are administering this program
through the states, letting the MATRIX avoid scrutiny. “There is no question they have hidden
this from Con-gress,” he says.

Law enforcement officials today describe MATRIX as nothing more than
a powerful search engine that can simultaneously scan billions of records. They say that it merely
consolidates databases already available to them but dispersed across multiple computer systems.
According to Mark Zadra, chief of investigations for the Florida Department of Law Enforcement,
the MATRIX is no longer used to generate lists of terrorist suspects.

Yet that wasn’t the spin MATRIX advocates used to hype the program. In convincing states to join, Seisint and Florida officials developed a PowerPoint presentation
highlighting the system’s ability to root out would-be terrorists. According to Seisint’s
own promotional material, within one week of receiving the list of 120,000 names, “several
arrests” were made, and in subsequent months “other arrests using the HTF” followed.
Officials refuse to provide details about the arrests, though it is believed most were for immigration
violations.

After producing the list at his own expense, Asher, a 53-year-old who
was already a mega-millionaire from his AutoTrack system, was eager to gain national support for
his new project. Although he is a Democrat, he wrote two checks in late 2002 to the Republican Party—$5,000
to the Florida party, $50,000 to the national party. In January 2003, he was invited to the White
House to give a presentation to Vice President Dick Cheney, FBI director Robert Mueller,
and Homeland Security director Tom Ridge. Jeb Bush was also present.

Inside the Roosevelt Room, Asher demonstrated the MATRIX’s potential.
According to a document titled “Briefing Points for the Vice President of the United States,”
which the ACLU obtained through a public records request, the “factual data analysis portion
of the project…holds the most promise of identifying potential terrorist cells and solving
other crimes.” It also notes that Florida was already a partner in the project with Seisint,
a firm that specializes in providing data for employee screenings, debt recoveries, and identity
verifications. The Department of Homeland Security subsequently awarded the MATRIX $8 million
as part of a “cooperative agreement” that requires a Homeland Security project manager
to “maintain managerial oversight and control of the activities, including redirection
of MATRIX activities or resources.”

For civil libertarians, the MATRIX conjures up memories of another
data-mining project—Admiral John Poindexter’s Total Information Awareness program,
which the Senate, out of civil liberties concerns, nixed in January 2003 before it launched. MATRIX,
however, has escaped congressional scrutiny since it is considered a state program. And while
MATRIX officials say that they are not using the system to create lists of potential terrorists,
critics worry that nothing forbids them from doing that in the future.

But Asher is unlikely to be involved in such a decision. In July, Seisint
was sold to Reed Elsevier, the Anglo-Dutch information and publishing company that owns LexisNexis.
He had already resigned from Seisint’s board of directors, as federal officials last year
became aware of his smuggling planeloads of cocaine into the United States in the early 1980s. (He
was never charged with a crime and became an informant against other drug traffickers.)

Still, Asher thinks the Feds are mistaken in not using the system to its
full, terrorist-scoring potential. “If the terrorist attacks continued and the Sears Tower
came tumbling down and the Golden Gate Bridge collapsed and Lake Superior was poisoned and a dirty
bomb went off in Houston,” he says, “would we be talking about whether we find it offensive
for the government to look into our personal records to determine we are not terrorists?”