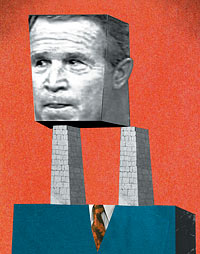 Administrations acquire collective
personalities that flow out and down from the top: Kennedy’s was cool, cerebral, and stylish; Nixon’s
was suspicious and vindictive; Carter’s was homespun, earnest, and inept; Reagan’s had the aura
of glittering artifice. The Bush administration has from the start conveyed a single trait that,
though it goes under different names, some flattering and some not, has the pervasive and unflagging
quality of a monolith. Call it resolve, discipline, stubbornness, clarity, oversimplification,
pigheadedness, will — they all come down to the same frame of mind. You recognize it in the
tough dismissiveness of the president’s avowal that “I don’t do nuance,” or the claim of his national
security adviser, shortly after being named to her post, that “I don’t do life crises.”

“To do,” used in this way, suggests that the speaker can’t be bothered to do
nuance even to the extent of coming up with a more descriptive verb. It borrows the terse bluntness
of informal military phrasing: “We do deserts, not mountains,” Colin Powell said of intervening
in Bosnia. An adviser to the 2000 Bush campaign coined the widely repeated phrase “superpowers
don’t do windows” (an assertion that has since been thoroughly refuted by extensive nation-building
efforts in Afghanistan and Iraq). And the arrogance in Donald Rumsfeld’s declaration last summer
that “I don’t do quagmires” may explain why, despite numerous warnings, he stuck to policies
that led to troop shortages, a widening insurgency, and the prison abuse scandals.

This kind of language makes inarticulateness a badge of honor, proof
that the speaker is too rough-hewn and just plain deter- mined to disguise or embellish the message
with more sophisticated terms. Nor will he be blown off his fixed course by concessions to polls,
criticism, or inconvenient facts. He says, like Popeye, “I yam what I yam and that’s all that I yam.”
This is the content of an astonishing number of Bush’s pronouncements, from “I believe God
wants me to be president” to “I’ll speak as plainly as I can. One thing is for certain about me, and
the world has learned this: When I say something, I mean it.”

It’s worth noticing that, although the ten- or of these claims shows
a sharp hostility toward introspection, the president ends up talking a great deal about himself.
“I’m a war president,” Bush told Tim Russert on Meet the Press in lieu of explaining his foreign policy.
When asked about public opinion, he says, “As to whether or not I make decisions based upon polls,
I don’t. I just don’t make decisions that way.” Every discussion of the war on terrorism turns on
an expression of firm resolve, as if the president had to pass only a test of will and not also one of
judgment — again, as if it’s all about him. The speaker is so terse, so impatient with explain-ing
himself, that his own personality seems to come down to the assertion of an intent.

Everything is personalized: “You tell your people that the president
looked you in the eye and told you that he would stick with you,” he said to Pakistani president Pervez
Musharraf. “I’m here for a reason,” he told Karl Rove after the terror attacks, “and this is how we’re
going to be judged.” It puts presidential decision making beyond the reach of rational argument
or even explanation. As a result, the administration famously never admits a mistake, never declares
a policy change in response to failure or criticism, always had known all along what it has only just
been obliged to start acknowledging now. Inflexibility has become a point of vanity with this presidency,
but what begins in personality ends in ideology, from the war in Iraq to the single-minded pursuit
of tax cuts.

The quality originates with the president, but it’s remarkable how
thoroughly it’s colored his administration. The White House’s communications strategy is based
on open contempt toward journalists’ desire for information; this is not a stone wall, which is
bound to have cracks and flaws through which pieces of real news can slip, but a reinforced
concrete blast wall. And, even beyond what’s normal for presidential underlings, members of the
Bush White House always seem bound to make deadly sure that the boss gets credit for everything.
The tone set from the top is that of a mortal fear of failure, as if conceding a single error might cause
the entire edifice to collapse.

This brings up the real question about the administration’s devotion
to unshakable purpose, its immunity to self-scrutiny and second thoughts: Isn’t this a good thing?
During a crisis, it really does matter whether the leadership is capable of standing up and persevering.
In the days and weeks after the terror attacks, it was vital for the country to know that President
Bush could make decisions and stick with them, that he would not be rattled — that he
could lead. It was all the more vital because what the public saw in the new president’s eyes when
he first emerged before the cameras on the evening of September 11 was not encouraging. That night
he looked rattled, diminished, out of his depth, an impression only deepened by the script he was
reading and his awkward ad-lib about “those folks who committed this act.” His cause had not been
helped earlier in the day when his adviser Karen Hughes announced that “the Secret Service
immediately secured the president, the vice president, and the speaker of the House, and they are
all safe” — as if the chief concern were the chief executive’s safety and not the republic’s.
One could be forgiven for thinking that all the hundreds of occasions since that day when Bush has
let the world know that he knows what he must do and that his course is fixed and right have been corrections
of that original wobble. Both before and since 9/11, Bush has had to prove to himself and the nation
that a lifetime of unearned successes and unpaid-for failures did not render him unfit to serve.
His is a presidency based on overcompensation.

If the Republicans have become the party of monolithic will, the Democrats
lately have been the party of nuance and complexity. They get to point out that the world is far less
simple than the president’s declarations of absolute moral clarity make it seem and that oversimplification
can be extremely dangerous. The ability to make distinctions and arrive at subtle judgments and
hold two competing thoughts in one’s head is crucial to functioning as an adult in the modern world.
But at least since Eugene McCarthy in 1968, and perhaps going back to Adlai Stevenson, the Democratic
Party has been afflicted by its attraction to a certain type of leader whose musings seem like profound
reflections to admirers but, to the general public, come off as unsteadiness and indecision. One
voter’s nuance is two others’ flip-flop, and during a crisis that coincides with an election this
equation can be fatal — ask Jimmy Carter.

It remains to be seen whether or not John Kerry is the latest avatar of
this Democratic archetype. But if he loses, it will be because the public doesn’t see in him a man
it can count on in a very dark time. This would be a shame, as well as a bit of a mystery, since Kerry’s
biography suggests less of a need for overcompensation than Bush’s does. For my part, I would like
to see a little more of the inspiring, action-taking leader that, according to his superiors’ reviews
of his service in Vietnam, Kerry once showed himself to be.

For models, Bush and Kerry should look further back than the obvious
historical examples, Reagan and Kennedy, both of whom mastered the style of leadership
with more assurance than they did its substance. For Bush, the most relevant ghost is Churchill’s,
whose wartime speeches have clearly inspired the efforts not just of Bush’s own speechwriters,
but of a large number of lifelong noncombatants who have recently discovered their inner Churchills
as resident fellows at the American Enterprise Institute. But long before Churchill told the world
in 1940, “We shall never surrender,” he presided over one of the biggest debacles in British
military history, the 1915 campaign on the Turkish peninsula of Gallipoli, in which the British
suffered a quarter million casualties before having to withdraw. The disaster nearly ended his
career when he was still a brash young star in his early 40s; the British public blamed Churchill
with a personal fury that went beyond what he actually deserved. “I am finished!” Churchill
moaned at one point; having lost his position as first lord of the Admiralty, he went off to serve
as an army officer in France. It may be that the searing experience of Gallipoli gave him the real
resolve that comes with knowing that mistakes and failures are not only possible but inevitable.
When, a quarter century later, Churchill was given another chance to lead during an even greater
crisis, his personal history allowed him to speak to the British public in a way that expressed the
whole nation’s will, for his own was not the point — it was never in question.

Roosevelt exemplified a different quality of leadership: not inflexible
resolve, but a deep confidence that allowed him to absorb his own numerous mistakes, during both
the Depression and the war, and shape his policies accordingly. “Above all, try something,” he
urged his Cabinet. When central planning under the National Recovery Administration failed to
achieve results, FDR — instead of asserting in rigid and halting fireside chats that he continued
to have faith in the NRA as the answer to the nation’s economic woes — turned his energy to social
welfare and the breakup of monopolies. The experimentation at the heart of the New Deal would not
have been possible if Roosevelt’s self-assurance had been so brittle that any confession of error
might have caused it to break. His flexibility in the face of facts had nothing to do with a weak will.
Roosevelt in his wheelchair was the very picture of strength.

It’s always tempting to turn psychobiography into history: If FDR hadn’t
been crippled as an adult by polio, would he have had the depth of compassion to launch the New Deal
and become a traitor to his class? History is driven by far more complex forces than just individual
character and the accidents that shape it. But when historians write of the Bush presidency and
the turn of the 21st century, one of them should ask a question like this: If Bush had been called to
serve out his Guard duty, sent off to Vietnam in the dying months of the war, and found himself having
to make life-and-death decisions on behalf of a squad of men, might he have gained enough true faith
in himself that he could later admit he was wrong about tax cuts or Iraq’s weapons of mass destruction?
Could he, at least once, have corrected a mistake?