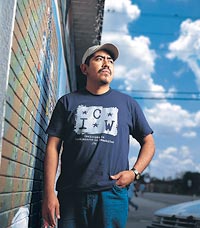 It seems an odd item to stash away. Stuffed in a file drawer at the Coalition of Immokalee Workers (CIW), in Immokalee, Florida, is an old work shirt covered with faded brown stains that look like mud. But they’re not, says coalition leader Lucas Benitez. They’re blood.

Back in 1996, a tomato picker had shown up at the coalition’s door; he was bleeding profusely after being beaten by his crew boss for requesting a water break. Benitez soon organized hundreds of coalition members—most of them
Mexicans, Guatemalans, or Haitians working in the region’s tomato fields and orange groves—to march on the crew boss’ home. The following day, not a soul went to work in the fields the man oversaw. “The other crew leaders were watching,”
says Benitez. “Since then, there have been no reports of physical violence in Immokalee to workers in the fields.”

So why keep the shirt for eight years? “It’s like having an iron ball and chain from when there was chattel slavery,” Benitez says. “It demonstrates the exploitation we faced, but also the anger and valor when we got united and acted
like a community, not a labor reserve.”

If you should find yourself out during the hours before sunrise in Immokalee—about 45 minutes inland from Naples—the words “labor reserve” might
indeed come to mind. Migrant laborers filter onto the dark streets from concrete
“dorms” and decrepit trailers jammed into the nine-block downtown core. They
gather in the drab salmon light of the street lamps overlooking the lot of La
Mexicana #5 market, where they’ll board buses or climb into the cargo beds of
high-sided panel trucks for the ride to the fields. The work is exhausting and
pitifully paid: At the going rate of 45 cents a bucket, laborers have to fill 125
buckets—two tons of tomatoes—just to earn $56 in a day.

Though the 28-year-old Benitez and his colleagues have eked out small raises in
recent years, the pickers’ piece rate has remained almost stagnant since the late
1970s. But working conditions have certainly improved since Benitez first arrived
in Immokalee in 1993 as an immigrant from Guerrero, Mexico. The violence has
stopped, and workers now get paid once a week, as they should. Crew leaders used
to “forget” a check or insist that it was not due, Benitez recalls. “So 40 or 50
of us would walk to the boss’ house, knock at the door, and say, ‘Here we are!’
Like a magic trick, the pay would appear.”

And when Benitez speaks of ending chattel slavery, he’s hardly exaggerating. His
group has pushed the Department of Justice to prosecute five agricultural slavery
rings in the South. In one case, undocumented workers had been bought from
smugglers and kept under armed watch, their wages garnisheed to pay for their
housing and other “debts.” For his efforts, Benitez was honored with the Robert
F. Kennedy Memorial Human Rights Award in 2003.

Benitez exudes the passion of an old-time labor agitator. He stands about five
and a half feet tall, but his energy and earnest manner give him an authoritative
presence. In his daily stint on CIW’s low-power radio station, he deepens his
voice, speeds up his Spanish, and rolls his R’s for dramatic flair—“R-r-r-r-adio
Conciencia!” he crows, as he reminds his listeners to take CIW’s phone number
with them and watch out for charlatans as they head north following the harvest.
For Benitez, it’s clear that serious work should also be fun.

Benitez is also quick to deflect attention: The force of CIW comes not from any
one person, he insists, but from the group. The coalition has 2,700 members and a
staff of eight, who share the work knocking on doors around town—few laborers
have telephones—to alert workers to upcoming actions. This ability to build
solidarity has served Benitez well in CIW’s boycott of Taco Bell and its
corporate parent, Yum! Brands. They are pressuring Yum! to pay a penny per pound
more for the tomatoes it buys, which could raise pickers’ wages to as much as
$100 a day and might add about a quarter of a cent to the price of a fast-food
taco. Benitez and his colleagues have led marches, including a 200-mile trek
across Florida, and a 10-day hunger strike in front of Taco Bell headquarters in
Irvine, California. They have also sparked a nationwide “Boot the Bell” campaign
on college campuses wherever Chalupas are sold.

In his early days in Immokalee, Benitez thought sometimes about finding better
paying work. “But that’s not the solution,” he insists. Likening the harvesters’
struggles to the early days of the autoworkers, he adds, “Picking is dignified,
honest work that deserves to be treated as such. This community of workers
is…clearing the path for those who will come behind us. It’s not something that
can wait for others. It has to come from us, who’ve worked in the fields.”