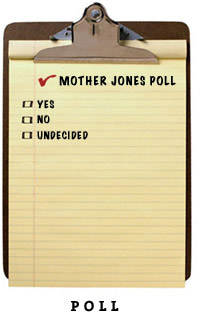 With only five months to go before the presidential election, the American public has concluded that something is going very wrong with America. Faced with the stark images of prisoner abuse and the grim reality of rising combat deaths, it is perhaps not surprising that a pall hangs over the nation. But doubts about the state of the union run deeper than those about Iraq and suggest how difficult it will be for the White House as it struggles to hold power in Washington. In this special national survey for Mother Jones, ordinary citizens describe an America where so many aspects of life, from the economy and financial standing to the country’s character and position in the world, have taken a bad turn.

As of today, Bush’s support has not collapsed despite the harsh mood of the country because of partisan division and polarization, which George Bush has fostered as part of his White House and campaign strategy for tightening the Republican hold on the three major institutions of government. The Bush people are deeply invested in appeals to their Republican base and to feeding the fires of the culture war. Their goal is to mobilize conservative foot soldiers and achieve greater unity with Republican base voters, despite unrest.

In a narrow sense, the conservatives have succeeded. Almost 90 percent of self-identified Republicans are voting for Bush, while 84 percent of Democrats back Kerry. On measure after measure, the candidates’ strategies for governing and politics have stalled the country at parity. The Bush-Kerry vote seems a dead heat and equal parts of the voting electorate approve and disapprove of Bush’s job performance. In the seventeen battleground states where the electoral college vote will be decided, Bush and Kerry divide the vote, as they do nationally. In the industrial heartland, in states like Michigan and Ohio, Kerry has a slight edge; whereas Bush has a comparable lead in rural states like Iowa and Missouri. Among voters who identify themselves as “middle class,” the race is dead-even. And on the cultural front, equal numbers like and dislike the NRA, and the same is true of pro-life, anti-abortion groups.

The problem is captured in a simple question we asked 500 survey participants: “Tell me whether you think our country is better off or worse off today than it was three years ago when it comes” to a list of “issues facing the country.” We asked another 500 participants about “issues facing people today” and “whether you are better off or worse off than you were three years ago.” They were asked about the country and themselves, respectively, with no mention of George Bush or politics.

For a start, one searches for an area where people think things have improved. There is one: people believe their local communities and communities across the nation have been strengthened. But in areas related to George Bush’s stewardship and the state of the union, voters believe a wide range of things are getting worse. Nothing rivals the federal deficit as an area of concern: it is a symbol of bad governance as well as a signal that government lacks the capacity to finance things important to the country. In a near unanimous vote, 80 percent say the deficits have worsened under Bush, with only 8 percent seeing improvement. And on nearly all indicators of material wellbeing, both for the country and for themselves, the overwhelming majority of Americans think things have worsened during Bush’s tenure. This is true for job security, the ability of personal incomes to keep up with the cost of living, access to affordable health care, the economy, and the creation of new good paying jobs.

Perhaps Bush’s tax policies could have offset this trend. But by nearly a two-to-one ratio (54 to 29 percent), people think their own tax burden has worsened. Tax cuts were the cornerstone of Bush’s economic policy, but even here the public says their burden is getting worse, not better. Maybe the job growth of the last three months and robust growth in the five months ahead will persuade voters to reevaluate their disposition. After all, it is hard to imagine that such improvements would not reduce the present bleakness of these economic judgments somewhat. But voters, as we learned in this survey, are reluctant to allow positive economic trends occurring on the macro level to override what they see going on in their own lives. However, even when we noted recent gains, two-thirds said that “the national economy may be turning around, but good jobs are still difficult to find in my community.”

Ironically, the one area where the country divides its conclusions is on “national unity“: 41 percent of voters say that America is better off and 45 percent think it is worse off. But this is misleading because it is Republican partisans who see a growing national unity, while Democrats and independents, by 50 to 34 percent, say we grow less united. For Bush, self-described “wartime” president, this can only be disheartening.

While these views about worsening conditions in everyday America are important, an even more powerful indicator of public’s consciousness is the perceived shuffling of the “winners” and “losers” in society, revealing the character of America in the Bush era.

People’s view of America is the starting point. In this period of American assertiveness, in which the U.S. has toppled two regimes, just 53 percent say America is a “winner,” while fully 41 percent say we are a “loser.” But again, this bare majority is produced by the bravado of self-identified Republicans, three-quarters of whom say America is a “winner”. Among independents and Democrats, only 40 percent reach this conclusion.

The American public is watching a changing world, and is unsettled about America’s security and economic position, and uneasy about rising global violence. But this is also a period where international organizations and anyone or country caught up in a war is losing. The position of the United Nations has eroded, as 55 percent see it as a “loser,” with only 29 percent seeing it as a “winner”. All of the combatants in all of the major struggles have lost: Al Qaeda (62 to 22 percent), the Palestinians (59 to 17 percent); the Israelis (43 to 35 percent); the Afghan people (41 to 38 percent) and the Iraqi people (48 to 39 percent). In fact, the American electorate sees very few “liberated people.” There is not much nobility, stability or pride to be had in a world where barely a majority of Americans believe we have won, where international organizations seemed damaged, and war zones produce only “losers”.

The electorate also has a very clear view of how our current government is choosing to remake America at home – by diminishing the middle class and elevating the already privileged, namely corporations and the wealthiest Americans. The starting point is the “middle class,” where voters have little doubt about their fate over the past three years: 56 percent says losers and only 37 percent says winners. “American workers,” no doubt buffeted by job losses in the manufacturing sector, help drag them down (63 to 30 percent); “the poor” are not surprisingly losers in this era (75 to 15 percent). Their fate is dramatically counter-balanced by “the wealthy,” whom 85 percent describe as winners, followed by “big corporations” (71 percent) and “CEOs” (65 percent). America has clearly been remade in the Bush era, resulting in an American society, best characterized as unfair or unbalanced, or, at best, divided.

America knows it is a divided country, and under Bush’s leadership likely to become even more so. Nearly two-thirds agree with the “many experts” who “say our country is now more politically divided on cultural, religious, and economic issues than at any time in our history. The results is very few voters left in the political center, and increasingly partisan and polarized political process.” When these voters were asked what would happen in the next few years, a sizeable plurality (41 to 18 percent) said the country would become more, rather than less, divided. A third thought we would remain as divided, as we are now.

If George Bush were to win reelection, the country has little hope of escaping the partisan polarization: 51 percent envision a country more divided, while 38 percent believe it will be more united. But voters are not even sure that President Kerry could change the well-entrenched political dynamics, with nearly equal numbers expecting more unity (38 percent) and more division (35 percent).

In the Bush era, polarization has been furthered by government policy and the social currents that swirl around it. Thus, under Bush, “Christian Conservatives” are viewed as winners, as are “gun owners.” On both sides of the cultural divide – conservatives and liberals, devout evangelicals and the secular, those owning no guns and those who own up to three – everyone acknowledges the gains of the social conservatives. Against secularizing trends, the Bush administration has acted to create a more hospitable public space for religion and to no new restrictions on gun owners.

But social conservatives have not defeated social liberals. The American public also sees “gays and lesbians” and “women” as winners. And again, both sides – men and women, conservatives and liberals, those who are married and those unmarried – all agree on this point, as modernizing forces continue to bring change and grow tolerance, regardless of who is in power. There is a reason why New York Times columnist Frank Rich, and other social critics, believe liberals are winning the cultural battles, even under the Bush presidency.

The result, however, is increased polarization. Each side grows stronger but each side also sees its enemies grow stronger as well. The result is a more divided America.