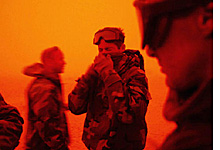 
Most young Americans who enlist in our all-volunteer armed forces-roughly four out of five-specifically choose non-combat jobs, becoming computer technicians, personnel managers, shipping clerks, truck mechanics, weather forecasters, intelligence analysts, cooks, forklift drivers … all jobs that carry a low risk of contact with an enemy. They often enlist because there simply aren’t enough jobs in civilian economy, and thus take refuge in the military’s long-established system of state socialism-steady paychecks, decent housing, medical and dental benefits, job training, and the possibility of a college education. The mother of one such recruit recently commented on her 19-year-old daughter, who will soon become an Army intelligence analyst. She was proud but also cynical: “Wealthy people don’t go into the military or take risks because why should they? They already got everything handed to them.” These recruits do not expect to be shot at. Thus it must have been a shock to the non-combat rank-and-file when last month Iraqi guns opened up on an Army supply convoy, killing eight and taking another six prisoner, including Pfc. Jessica Lynch of Palestine, West Virginia, a supply clerk. The Army’s response has been that “You don’t have to be in combat arms [of the military] to close with and kill the enemy.”

Despite her high-profile story, Jessica Lynch is still the exception to the rule. It is rare that non-combat military personnel will ever find themselves in a firefight. But that hardly means that soldiers doing non-combat duty aren’t at risk. What the Pentagon is not saying to the Private Lynches and their families is that all soldiers, regardless of their duties, stand a very good chance of dying or being catastrophically disabled simply because they chose the military as a route of social mobility.

It has become clear that there are serious unintended consequences to these “no contact” or “painless dentistry” wars that contradict the Pentagon’s claims of low casualties — and those consequences fall just as heavily on non-combat soldiers as on their front-line compatriots.

The first Iraq War produced four classes of casualties: killed in action; wounded in action; killed in accidents (including “friendly fire”); and injuries and illnesses that appeared only after the end of hostilities. During 1990 and 1991, some 696,778 individuals served in the Persian Gulf as elements of Operation Desert Shield and Operation Desert Storm. Of these 148 were killed in battle, 467 were wounded in action, and 145 were killed in accidents, producing a total of 760 casualties, quite a low number given the scale of the operations.

However, as of May 2002, the Veterans Administration (VA) reported that an additional 8,306 soldiers had died and 159,705 were injured or ill as a result of service-connected “exposures” suffered during the war. Even more alarmingly, the VA revealed that 206,861 veterans, almost a third of General Schwarzkopf’s entire army, had filed claims for medical care, compensation, and pension benefits based on injuries and illnesses caused by combat in 1991. After reviewing the cases, the agency has classified 168,011 applicants as “disabled veterans.” In light of these deaths and disabilities, the casualty rate for the first Gulf War is actually a staggering 29.3%.

The most important factor in that casualty rate is the malady that goes by the name “Gulf War Syndrome,” a potentially deadly medical disorder that first appeared among combat veterans of the 1990-1991 Gulf War. Just as the effects of Agent Orange during the Vietnam War were first explained away by the Pentagon as “post-traumatic stress disorder,” “combat fatigue,” or “shell shock,” so the Bush administration is now playing down the potentially toxic side effects of the high-tech and lethal munitions now being widely used by its armed forces. The implications are devastating, not just for America’s adversaries or civilians caught in their countries-turned-battlefields, but for American forces themselves (and possibly even their future offspring).

Dr. Doug Rokke, a former Army colonel and professor of environmental science at Jacksonville University, was in charge of the military’s environmental clean-up following the first Gulf War. The Pentagon has since sacked him for criticizing NATO commanders for not adequately protecting their troops in areas where ammunition made from depleted uranium (DU) was used, such as Kosovo in 1999. Dr. Rokke notes that many thousands of U.S. troops have been based in and around Kuwait since 1990, and according to his calculations, between August 1990 and May 2002, a total of 262,586 soldiers became “disabled veterans” and 10,617 have died. His numbers produce a casualty rate for the whole decade of 30.8%.

The suggestion that exposure to DU munitions was a significant factor in these deaths and disabilities is a hotly contested proposition. Some researchers, often paid by the Pentagon, argue that depleted uranium could not possibly be the cause of these war-related maladies, and that a more likely explanation is dust and debris from the blowing up of Saddam Hussein’s chemical- and biological-weapons factories in 1991, or perhaps a “cocktail” of volatile particles from DU ammunition, destroyed nerve gas bunkers, and burning oil fields. But the evidence-including abnormal clusters of childhood cancers and deformities in Iraq and those areas of Kosovo where we used DU weapons in our 1999 air war-points convincingly toward depleted uranium.

Depleted uranium, or Uranium-238, is a waste product of power-generating nuclear-reactors. It is used in projectiles like tank shells and cruise missiles, because it is 1.7 times denser than lead, burns as it flies, and penetrates armor easily. But it breaks up and vaporizes on impact-making it potentially very deadly. Each shell fired by an American tank includes ten pounds of DU. Such warheads are essentially “dirty bombs,” not very radioactive individually but nonetheless suspected of being capable in quantity of causing serious illnesses and birth defects. Simply by insisting on using such weaponry, the American military is deliberately flouting a 1996 United Nations resolution that classifies DU ammunition as an illegal weapon of mass destruction.

In 1991, U.S. forces fired a staggering 944,000 DU rounds in Kuwait and Iraq. The Pentagon admits that it left behind a minimum of 320 metric tons of DU on the battlefield. One study of Gulf War veterans showed that their children had a higher possibility of being born with severe deformities, including missing eyes, blood infections, respiratory problems, and fused fingers. And now, Dr. Rokke fears that, because the military relied more heavily on DU munitions in the second Iraq War than in the first, postwar casualties may be even greater. When he sees TV images of unprotected soldiers and Iraqi civilians driving past burning Iraqi trucks destroyed by tank fire or inspecting buildings hit by missiles, he suspects that they are being poisoned by DU.

Young Americans being seduced into the armed forces these days are quite literally making themselves into “cannon fodder,” even if they have been able to secure non-combat jobs. Before we begin to celebrate the small numbers of casualties American forces suffered in their brief Iraq war, we might pause to consider the future. The numbers of Americans killed and maimed from Gulf War II are only beginning to be toted up. The full count will not be known for at least a decade. The fact that the U.S. high command continues to rely on such weaponry for warfare is precisely why the world needs an International Criminal Court, and why the United States should be liable under its jurisdiction. Because of its potential dangers, and because the alarm has been raised, the use of DU ammunition should already be considered a war crime-one that may also destroy the user in a painfully crippling way.