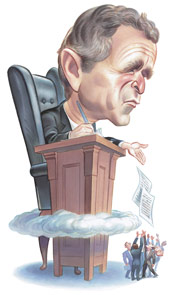 A Confederacy of Cronies
By George Packer
November/December 2002 Issue
Ruling by corporate fiat is no way to run a democracy. But that’s all George W. Bush knows.

Course Correction Required
By Micah Sifry
November 18, 2002
Democrats need to stop playing me-too politics and challenge the GOP on its weakest flank — its subservience to its big corporate paymasters.

Unjust Rewards
By Ken Silverstein
May/June 2002 Issue
The government continues to award federal business worth billions to companies that repeatedly break the law. A Mother Jones investigation reveals which major contractors are the worst offenders.

Counting Caribou
By Tom Dunkel
May/June 2001 Issue
The industry-friendly Bush-Cheney oil drilling plan could endanger the Arctic’s largest caribou herd — and the people who depend on it.

The Texas Solution
By Peter Klebnikov
July/August 2001 Issue
The federal government is facing a glut of radioactive waste — and a contract to bury some of it could be worth millions to one of George W. Bush’s top fundraisers.

The Mother Jones 400: Campaign Inflation
By Eric Bates
March 5, 2001
Industry pumped in a record 696 million dollars to elect George W. Bush and a GOP Congress. The Mother Jones 400 reveals the nation’s top contributors — and what they expect in return.