Cleaning Up With Cancer

High up on the list of soccer-mom fears are getting breast cancer and failing to properly juggle work and home. Now Eureka has found a way to link—and some would say exploit—both these concerns in its “Clean for the Cure” campaign. Buy a WhirlWind Litespeed vacuum—$200-$300 retail—

and the company will donate a dollar to the Susan G. Komen Breast Cancer Foundation, up to an annual cap of $250,000. And, because “vacuuming is sometimes part of the problem for individuals recovering from breast cancer,” Eureka will provide six women a year’s worth of cleaning services—and a Litespeed, presumably for their new maids.

Popularized by Avon, American Express, Yoplait, and others, such corporate “pinkwashing” campaigns, in the words of Breast Cancer Action, “exploit the most conventional stereotypes of women—cooking, cleaning, shopping, wearing makeup—suggesting that women are more suited for consumerism than political action.”

BCAurges women to “think before they pink.” For example: Should a woman recovering from surgery or chemo be made to give a damn about dust bunnies?

Fake parking tickets are being left under the wipers of SUVs across the country, raising both drivers’ blood pressure and consciousness. In Brooklyn, the NYPD, a.k.a. the New York Pranks Division, is citing drivers for violations such as “Increasing U.S. reliance on foreign oil,” “Contributing to childhood asthma,” “Holing self up in two-ton metal fortress,” and “Compensating for lack of manhood.” The penalties range from a slap on the wrist—”SUV must be used for carpools only”—to the draconian “Blow yourself up (please).” 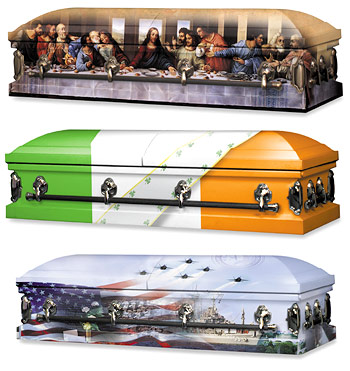 The downloadable tickets are the brainchild of Carrie McLaren, who was outraged at seeing SUVs covered with patriotic flags and slogans. “I felt that I needed to make a connection for people between our reliance on oil and our wasteful living, especially after September 11,” she says. Other pranksters and activist groups have joined the effort, creating a nationwide protest movement that is ticketing the streets, one SUV at a time.

Thinking Outside The Box

Death be not proud, but maybe a little vain is okay. That seems to be the impulse behind WhiteLight’s art caskets, customized coffins adorned with scenes such as “Fairway to Heaven,” “Gone Fishing,” and, for the devoted hair-metal fan, the “Kiss Kasket.” 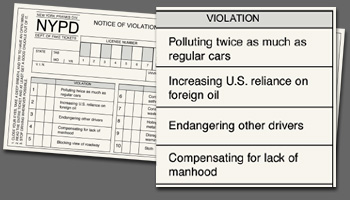 Some critics see art caskets as classic expressions of Me Generation self-absorption and baby boomer narcissism and feel that a funeral focusing on the personality of the deceased is somehow unseemly. But though not everyone would choose to make the journey to the great beyond in a checkered-flag “The Race Is Over” coffin, an art casket can be a meaningful way to have the last word.