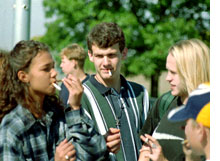 When tobacco companies began paying $246 billion in 1998 to offset the cost of treating smoking-related illnesses, state officials celebrated. The money, they promised, would go to prevent smoking, a habit responsible for 1 in every 5 American deaths. States could finally “do the things we all want to do,” declared Governor Tommy Thompson of Wisconsin, who now serves as secretary of Health and Human Services, “and that’s the cessation of smoking, especially with our young, and the improving of health care and education of all our citizens.”

But today, few states are devoting the money to fight smoking. Instead, some are handing over the hard-won tobacco settlement to those who profit from tobacco. In North Carolina, the nation’s biggest tobacco-producing state, three-quarters of the $59 million spent so far has gone to private tobacco producers. The state has paid for tobacco-curing equipment for farmers, a new tobacco auction hall, a video to greet visitors to a state-funded tobacco museum, and $400,000 in plumbing for a new tobacco processing plant. Virginia gave $2 million in marketing “incentives” to a cigarette company called Star Scientific, which took the money and then sued the state to overturn the settlement. Seven states have actually invested the settlement in stocks of the very tobacco companies they sued in the first place: Texas has devoted an estimated $3.6 million to investments in major cigarette manufacturers.

When states aren’t returning the money to Big Tobacco, they’re using it to fund all manner of projects that have nothing to do with smoking. New York spent $700,000 on new carts and sprinklers for a public golf course. Alabama devoted millions to build factories for Honda, Mercedes-Benz, and Lockheed Martin, and gave some of the money to public schools to fight satanic cults. Fresno County is using settlement money from the state of California to build a juvenile jail, and Los Angeles is devoting much of its share to paving streets.

All told, according to the National Conference of State Legislatures, less than 5 percent of the $33 billion already paid out by the tobacco industry has gone to prevent smoking. Just four states fund antitobacco programs at the minimum levels recommended by the Centers for Disease Control. And it’s getting worse: Over the past year, states have slashed their already meager tobacco-prevention efforts by 13 percent to help shore up budget shortfalls.

“It is moral treason,” says Mike Moore, the Mississippi attorney general who settled the first of the tobacco lawsuits. “If you don’t use the proceeds from this to impact public health, then what did we fight this fight for?”

As the economy has worsened, 13 states have cashed in all of their future settlement payments — nearly $3 billion — and spent most of the money to rescue their cash-strapped budgets. This summer, Wisconsin scrapped plans to spend $25 million on an antismoking campaign, converted its entire settlement into bonds, and then spent all the money on a onetime fix for its general budget.

“With all due respect to Wisconsin and their political dilemma, it’s outrageous,” says Heidi Heitkamp, the former North Dakota attorney general who sued Big Tobacco. “I can’t tell you how disappointing it is for those of us who spent two years on this.” Heitkamp’s own state has put water reclamation and flood-control projects before smoking prevention. With some of the highest teen smoking rates in the nation, North Dakota has set aside $349 million of the settlement for water projects — but spends just $2.3 million a year on prevention, less than a third of the minimum CDC recommendation for the state.

Other states have an even worse record. Tennessee, Missouri, Michigan, and the District of Columbia won’t promise to spend any of their settlement money on smoking prevention, and 14 other states have set aside minuscule amounts.

California is one of the few states that have bucked the trend, recognizing that antismoking programs pay for themselves in the form of lower health care costs. The state’s aggressive tobacco-prevention program, which predates the settlement, has cut smoking rates by 50 percent since 1989. Given reduced costs for lung cancer and other tobacco-related disease, California estimates that it is more than breaking even on its investment. Without such programs, say health officials, states face a dire reality. At current rates, 6 million American children will die prematurely from a smoking-related disease, according to the CDC. “It becomes a question of how many of those 6 million do we want to save,” says Dr. Terry Pechacek, associate director for science at the CDC’s Office of Smoking and Health.

In some states, voters are fighting to steer the settlement money into smoking prevention programs. Both Montana and Michigan put initiatives on the November ballot that would require political leaders to spend the funds on efforts to curb smoking. But without such restrictions, states will likely continue to burn through the tobacco settlement. North Carolina, for instance, has spent $200,000 of the money to promote a horse park in Raeford known for its steeplechases, polo matches, and funny-hat contests. The park attracts tourists to one of the most economically depressed parts of North Carolina — but does little to help the 1 in 10 children in the state who are projected to die from smoking.