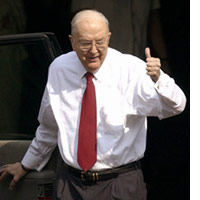 At the 1988 Republican National Convention, he defended his own absence in Vietnam in a bizarre statement that implicated affirmative action. According to a Houston Press reporter’s summary, the argument went like this: “So many minority youths had volunteered for the well-paying military positions to escape poverty and the ghetto that there was literally no room for patriotic folks.”

The Honorary Diddly for Lifetime Achievement

Jesse Helms retires this year among a bizarre bouquet of accolades. But, with his departure, it would be rude not to recall some of his pearls of wisdom, such as this gem from 1950: “White people, wake up before it is too late. Do you want Negroes working beside you, your wife, and your daughters, in your mills and factories?” In 1963 he said, “The Negro cannot count forever on the kind of restraint that’s thus far left him free to clog the streets, disrupt traffic, and interfere with other men’s rights.” He regularly called the University of North Carolina “the University of Negroes and Communists.” Spotting Senator Carol Moseley-Braun in the elevator in 1993, he bragged, “I’m going to make her cry. I’m going to sing ‘Dixie’ until she cries.” But nothing quite matches a more recent appearance on CNN’s Larry King Live. When a caller gushed over Helms for “everything you’ve done to help keep down the niggers,” Helms, seized by a Dr. Strangelove moment, turned to the camera, saluted, and replied, “Well, thank you, I think.”