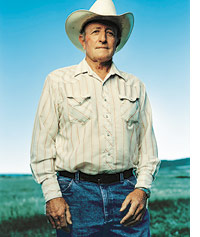 A Rural Flare-Up
By Rebecca Clarren
November 4, 2002
Throughout the Intermountain West, plans for coalbed methane development on private land are pitting county officials against state regulators, and rural residents against the gas industry.

The New Range Wars
By Verlyn Klinkenborg
November/December 2002
They come on your land and take what lies beneath. In Wyoming’s coalbed methane country, it’s the ranchers versus the wildcatters.

Open Season on Open Spaces
By Bob Burtman
July/August 2002
The Bush administration has made energy development on public lands its priority number one. The wild West will never be the same.

From the high alpine valleys of Montana to the border grasslands of New Mexico, the energy rush is on. We review how the Bush administration’s plans for accelerating energy production in the west is threatening ten wilderness areas.

Land board says, ‘Look before you lease’
By Adam Burke

May 13, 2002
The rush to develop methane on Wyoming’s public lands has hit a regulatory speed bump of undetermined size.

Montana gets a crash course in methane
By Hal Clifford
November 5, 2001
The Powder River Basin doesn’t end at the Wyoming state line; about one-third of the sprawling basin lies in Montana.

Colliding forces: Has Colorado’s oil and gas industry met its match?
By Rebecca Clarren
September 25, 2000
The majority of Colorado’s 70,000-plus oil and gas wells are in rural counties where real estate development is burgeoning.