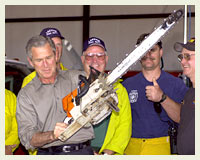 As wildfires continue to burn across the American West, from Colorado to California, a debate is heating up over how the Bush administration has implemented the federal government’s fire-prevention plan.

Spurred into action by the catastrophic wildfires of 2000, which burned more than 8 million acres, Congress approved a National Fire Plan in the fall of that year. In the initial draft of the plan, Clinton administration officials called for a multi-pronged approach to protecting communities near fire-prone forests. Among other things, that initial plan advocated the limited thinning of forests considered to be at high risk of fire — particularly forests in which logging or earlier fires had claimed large trees, allowing highly flamable small trees and shrubbery to take over.

Still, forestry experts warned in the 2000 plan that logging should be used carefully and rarely; in fact, the original draft states plainly that the “removal of large merchantable trees from forests does not reduce fire risk and may, in fact, increase such risk.”

Now, critics charge that the Bush administration is ignoring that warning. Neil Lawrence, a policy analyst with the Natural Resource Defense Council, claims that Washington has taken a far more aggressive approach to incorporating commercial logging in its wildfire prevention plans. As a result, Lawrence and other critics say, the National Fire Plan is becoming a feeding ground for logging companies. Moreover, critics claim the administration’s strategy, far from protecting the lives and homes of those most at risk, could actually increase the likelihood of wildfires.

“The plan consists mostly of complaining about forest fires and ginning up more money for logging,” Lawrence says.

To oversee the plan, for which Congress has approved some $2.27 billion, the Bush administration has formed a new cabinet-level Interagency Wildland Fire Leadership Council. The panel is co-chaired by Undersecretary of Agriculture Mark Rey, who happens to be a former timber-industry lobbyist. That money is paying for hiring an additional 5,000 firefighters nationwide, and for a broad range of fire-prevention efforts, including what is called “hazardous fuels reduction” — the removal of trees and other flammable material from forests.

While most environmentalists do not argue with the basic approach, they charge that too many old, large trees are being cut down under this rubric of “fuels reduction,” and that federal land managers are allowing commercial logging operations to cut too many large trees too far from cities or towns, where the clearing has no real impact on human safety.

As a recent Sierra Club report explains: “(L)ogging operations are likely to remove the trunks for lumber while leaving behind mountains of slash that can ignite into a raging bonfire, or they leave behind clearcuts littered with tinder across which wildfires can race and grow … [W]hen thinning is used as a method of fire prevention, the dense and flammable brush that leads to intense fires is not sufficiently removed.”

Lloyd Queen, director of the National Center for Landscape Fire Analysis in Missoula, Montana, argues that environmentalists are exaggerating the degree to which the fire plan promotes logging and the fire risk posed by commercial logging. Using satellites and computer mapping, Queen is helping the Forest Service and other agencies to determine what federal forests are most at risk during wildfire season. He estimates that roughly 40 million acres across the country need some sort of thinning — either through logging or so-called ‘prescribed fires,’ small wildfires set by forest managers.

“There’s a broad consensus that we need to treat these areas,” Queen says. “I just don’t see federal managers as being able to use the plan as justification for just cutting trees.”

The results of an internal audit conducted by the Agriculture Department last fall, however, suggest that Queen’s faith may be misplaced. That audit found that nearly $2.5 million in funds designated for rehabilitation and restoration projects in Montana’s Bitterroot National Forest were instead spent on preparations for commercial logging projects. Environmentalists at the Center for Biological Diversity in Tucson, Arizona, say forest managers are taking similar steps in the Southwest. One federal forestry project, ostensibly an attempt to reduce the risk of fire in Arizona’s Sitgreaves National Forest through commercial thinning, was allowed to lapse into a wholesale logging bonanza, center officials claim. Another such project, in New Mexico’s Gila National Forest, resulted in the unplanned commercial logging of dozens of acres of large trees, center officials say.

In California, the John Muir Project reports that more than 95 percent of the $15.5 million earmarked for fire plan projects in the Sierra Nevada national forests has been diverted to fund commercial logging. Merri Carol Martens, Forest Service spokesperson, confirms that logging is indeed called for in the projects funded by that $15 million, but are only one component of them. Another Forest Service spokesperson, Mary Farnsworth argues that, in some cases, commercial logging is a reasonable tool that can help improve forest health and avoid wildfires. And, she adds, in cases where it provides some local economic benefit, it’s a very attractive approach.

“But you have to keep in mind, it’s just one approach, we’re using,” Farnsworth says, noting that prescribed burns, non-commercial logging, and other approaches are also under consideration. “But you can’t deal with the removal of large or small standing material as effectively with a prescribed burn, and we have plenty of science that says the fuel has got to come out of the woods.”

Still, environmentalists maintain that the Forest Service’s enthusiasm for “fuels reduction” is doing little more than fueling commercial logging. And they argue that, by allowing for commercial logging as part of the plan, forest officials are actually ignoring the very science Farnsworth cites.

“It’s a classic bait-and-switch,” says Timothy Ingalsbee, director of the Western Fire Ecology Center, an Oregon-based advocacy group. “They want to do commercial logging and call it fuels reduction.”