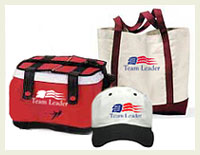 The idea and the message may be old, but the medium is new. So are the snazzy fleece pullovers and tote bags.

Employing a mix of huckster marketing and grassroots organizing, the Republican National Committee has launched a new web site designed to nurture local GOP activism. The site, gopteamleader.com, is intended to help party loyalists organize at the local level around important national issues. On one level, the new “Team Leader Initiative” seems like little more than an electronic letter-writing campaign or get-out-the-vote push. The twist comes in how party activists are rewarded for their involvement.

Contrary to more traditional, volunteer-oriented efforts at grassroots organizing, participants in the new GOP program are rewarded for the efforts. By reporting their activities to the site, they earn GOPoints, which they can use to order a variety of paraphernalia emblazoned with the Team Leader stars-and-stripes logo.

Republican leaders, understandably, are more effusive in their praise for gopteamleader.com.

“The Team Leader program will revolutionize the way we communicate with our grassroots supporters, and the way activists participate in the political process,” said Republican National Committee chairman Marc Racicot at the site’s unveiling.

While the emergence of gopteamleader.com underscores the potential importance of the Internet in contemporary political organizing, some suggest that Republicans may simply be catching up to the digital trend. Not that Democrats are doing much more. Lytell admits that mainstream politicians have yet to tap the full organizing potential of the Internet.

“The biggest obstacle to getting campaign-makers to authorize serious online organizing is that it requires that they suspend the cardinal rule for all political professionals who have come of age in the era of televised campaigning — that effective, modern campaign management is about message control,” said Lytell at a campaigns and elections seminar in Washington, D.C. last weekend. “In a nutshell, the Internet is most effective as a campaign medium when a campaign’s strong partisans can be harnessed to carry on a sustained conversation with its weak partisans, so that they become sufficiently engaged to actually get out and vote.”

While it lacks the capacity to support such a dialogue, gopteamleader.com is intended to function as a “virtual command center,” an electronic political headquarters through which strong partisans can learn how to better support the party and its political leaders. Through the site’s Frequent Actions bulletins, Team Leaders are encouraged to build up a local network of GOP activists and to contact local talk radio, print, and television outlets. The site’s Talking Points section provides Team Leaders with point-by-point outlines of official Republican positions on issues of concern.

The gopteamleader.com site is built around CaPWiz, an Internet tool that helps users flood government representatives and local media with pre-formatted letters. Hardly a revolutionary advancement in communications, CaPWiz is already being used by advocacy groups, corporations, and universities — among them Yahoo!, USA Today, George Mason University and the League of Conservation Voters. With the increased use of CaPWiz and similar Internet programs, however, the impact of such boilerplate letters has worn off. According to Richard Civille, co-editor of Communication Technology review, legislative directors have become increasingly savvy in detecting these letters. “Email messages have no impact of any kind,” admits Lytell. “Nobody counts them.”

Still, while the letters may be disregarded on Capitol Hill, the broadening appeal of the Internet could aid the gopteamleader.com mission of organizing party loyalists via the Web.

“A couple of years ago the Internet demographics was of young, technically literate professionals,” says Civille, a leading figure in grassroots telecommunications organizing. “The Internet now looks like the rest of our society and is subject to mass market appeal. By appealing to the new Internet demographics, gopteamleader has a prospect of swinging votes in key congressional districts next fall.”