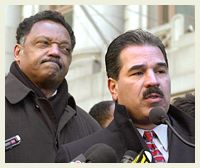 When asked whether he considers himself an activist, Dennis Vegas pauses before offering an answer.

“I don’t know if that label applies,” says Vegas, who, like thousands of other onetime Enron employees, lost his job in December when the giant Houston energy firm began its spectacular implosion. Nonetheless, Vegas says that he has been moved to use his experience — and the attention that has come with it — to ensure that other American workers don’t suffer a similar fate.

“If that’s being socially responsible, I’ll take that one,” he says.

Investors lost millions when Enron, the seventh-largest company in the nation at the time, filed for bankruptcy in December. The collapse of the stock was particularly damaging for company employees like Vegas, who saw retirement accounts loaded with Enron stock wiped out.

In the wake of Enron’s bankruptcy — the costliest in US history — two large groups representing Enron workers formed, the Ad Hoc Committee of Former Enron Employees and the Severed Enron Employees Coalition. Both are focused on reclaiming employees’ lost pensions, retirement funds and severance packages.

For a few former Enron workers, however, the fight is not simply about recouping lost money. Lending their voices to the emerging national campaign for pension law reform, Vegas and others now find themselves appearing alongside labor leaders and progressive activists, providing a human face to the Enron collapse and urging Washington lawmakers to give the nation’s workers more authority to manage their own retirement investments and increased protection against losing those investments as a result of their employer’s bankruptcy.

A vice president of brand management and strategic marketing at Enron for nearly five years, Vegas says most US workers have simply never considered how existing pension and bankruptcy laws could place them in the same risky position as the employees of the now-infamous Houston firm.

“Very few people haven’t heard of Enron, but very few people understand what structurally permitted it to take place,” says Vegas, his slight Bronx accent a reminder of a New York City childhood. “When they begin to do their own self-analysis, they begin to find out that we are not alone — that they are themselves vulnerable in many respects and that it’s imperative that they take some action to protect themselves.”

Debbie Perrotta acknowledges that she gave such concerns little thought during her time at Enron.

“I trusted Enron. You know, I really did,” says Perrotta, who was a senior administrative assistant at the Houston firm. “They made you feel like you were one part of the family. I was comfortable there.”

Jolted out of that comfortable life by the company’s collapse, Perrotta has since accepted an invitation to testify before a Senate committee and appeared with progressive leaders at a gathering of political and social activists in Austin last month. Perrotta has speaking dates lined up into November.

“I never did this before. I never spoke publicly before,” says Perrotta. “I’ve channeled my energy, my anger, into something positive.”

“We’re not political activists,” says Rod Jordan, chairman of the all-volunteer SEEC. “Although, we … encourage our members to get out there and become active and support whatever they believe in, we don’t do it as an official function of our group.”

Vegas and Perrotta both trace their own activism to the Rev. Jesse Jackson’s January visit to Houston. Jackson, who met with both Enron employees and the company’s patriarch, Kenneth Lay, used the occasion to call for greater severance pay for laid-off workers and expanded protections for workers’ rights under corporate bankruptcy laws. Jackson then accompanied a group of former Enron employees to Washington, where they urged lawmakers to take up the bankruptcy and pension reform initiatives.

The employees who joined Jackson in the nation’s capital have since joined with other current and former Enron workers to form a loose coalition. While the group itself has no distinct agenda, Vegas and Perrotta have both emerged as compelling advocates for pension and bankruptcy reform.

“They’re making a difference for every single one of their [former] co-workers. It’s the difference that a dozen really committed people can make for everyone,” says Kathy Roeder, an AFL-CIO staff member who has been working with Vegas and Perrotta. “They’ve done an outstanding job of building a network of former employees and these are not workers that were organized. None of them really had an organizing background.”

“These are people who have a very powerful message,” says Jim Hightower, co-organizer of the Rolling Thunder Down Home Democracy Tour, the Austin gathering — which Mother Jones has supported and helped to sponsor — where Perrotta and Vegas both spoke. “It’s no longer poor people who are getting stomped on. It’s now the middle class and soon to be the upper middle class.”

Having met with groups from Oregon to New York and Louisiana to Wisconsin, Vegas says his resolve has only grown. While still uncomfortable calling himself an activist, the former executive seems comfortable embracing an increasingly active role in the pension reform fight.

“You begin to develop alliances with people who maybe saw things you didn’t see many, many years ago and have been consistently struggling to get a message out,” he says. “Because there’s so much focus on Enron, we have the platform for major changes, major reforms and so, it’s like ‘carpe diem,’ you need to take advantage of it while it’s hot.”