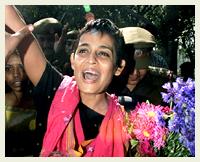 Arundhati Roy is not known for holding her tongue.

Roy leapt onto the literary stage in 1997 with the publication of her first — and as yet only — novel, The God of Small Things. The novel captured Britain’s prestigious Booker Prize and sold 6 million copies.

With the novel’s success came fame for Roy, both in her native India and around the world. The 40-year-old novelist has used that fame to emerge as an outspoken critic of corporate globalization and India’s government. In particular, Roy has become a vocal opponent of India’s Sardar Sarovar dam project, which threatens to displace 500,000 people.

It was Roy’s willingness to openly challenge authority — in this case India’s Supreme Court, which ruled that the dam project be allowed to proceed — which landed her in a New Delhi jail on a contempt of court charge.

Roy spent one night behind bars, but now her decision to pay a fine and thus avoid serving the full three-month sentence imposed by the high court is drawing criticism from some in India and Great Britain, who dismiss Roy as just another member of India’s ‘radical chic.’ Roy, however, says she chose to pay the fine simply because remaining in prison would not have served any meaningful purpose. And she says she has no intention of allowing her critics to silence her.

MotherJones.com: Knowing that if you had stayed in jail, it would have been international news for weeks if not months, and it would have brought so much attention to this cause, because in writing about you, the media would have had to write about the court case and the dams — knowing that, why did you choose to pay the fine?

Arundhati Roy: No, it would not have [brought attention to the cause], it would have brought attention to me. It would have been look at her, what a woman, how wonderful, she’s so brave. It would have taken away attention from the cause. I’m not trying to trash the court, or I’m not trying to say that there shouldn’t be a court. I’m just trying to say that this is wrong, this bit of what is happening is wrong. And it’s not about me. I don’t want to be celebrated for having volunteered to spend three months in jail. I’m not fighting to stay in jail, I’m fighting to be able to say what’s on my mind and I don’t think that one needs to milk a situation for political mileage in a false way. This is for India’s free press and India’s free people to fight. It’s not my cause alone. I have made my point. I have stood my ground. It was an interesting decision, you know, when I was in jail. Because actually, I would have had no problem staying there. I wasn’t even remotely traumatized by it, and there was the voyeur in the writer that was tempted. But I just didn’t think it was in any way the right thing to do.

MJ.com: When did you actually make the decision to pay the fine?

AR: It came so suddenly. I wanted to read the judgment — I wanted to understand the implications. And also, though it had nothing to do with anything, talking to the women in jail also made me make that decision. Somehow when you’re in there there’s a completely different set of rules that apply and you’re suddenly dunked into this completely different world, and they look at you as if you’re crazy, why would you want to stay here voluntarily? And it somehow seemed disrespectful to what they were going through, sitting there for six years and counting the hours. Somehow it felt very self-righteous. But that’s a side issue. For me, the important thing is that one is fighting for the right to speak, and to speak, one must keep speaking. It’s much more important to come out and insist that you have the right to keep speaking, and to keep speaking, rather than to sit in jail for three months.

MJ.com: How accountable do you think the Indian government is to its people?

AR: There’s this concept in the contempt of court law that truth is not a defense. So Justice [S. P.] Bharucha, the chief justice, said that 20 percent of India’s judiciary is corrupt. But supposing you say that a judge is corrupt and here is the evidence? You’re not allowed to say it. You will be put into jail for saying it. Because even if he’s corrupt, truth is not a defense. Can you imagine that? It’s unbelievable. That’s the situation. Because by proving that he’s corrupt you’re lowering the dignity of the court. So that’s what we are saying, that the Supreme Court is the most powerful institution in this country today and the most unaccountable. And even if you don’t talk about monetary corruption or political corruption, even if you just look at something in terms of an ideology, say you look at a series of judgments together, the Narmada judgment which says big dams are very good, and that it really helps tribals to be uprooted because they get the fruits of modern development. Now they get displaced and they go to the cities and they squat in the slums. Then the Supreme Court has judgments, or the Bombay High Court, I’m not sure which, but the same judge actually, has a judgment about slums where he says slum-dwellers are pickpockets of urban land. So they’re out of their valleys, out of their homes, then this entire informal sector was closed down in Delhi last year. So ultimately, shouldn’t you be allowed to look at a series of judgments and say, look there’s a sort of political or social ideology emerging here? But that you’re not allowed to do, because that’s contempt of court. So as I said in my affidavit, if you’re going to wade in and actually take decisions that affect the lives of millions of people, then you have to be accountable. The more powerful you are, the more accountable you have to be.

MJ.com: How free do you think the press is in India? What’s holding them back?

AR: One thing is the whole process of self-censorship, the limits the press imposes on itself. And then there are the overt restrictions of the freedom of the press. The overt restriction in India comes from this contempt of court thing. Today the court is in retreat from democracy. It decides whether a dam should be built or not, whether slums should be closed down or not, cases like Enron that involve major sectors of private industry. So these are huge issues and it doesn’t matter which side of these issues you fall on, it doesn’t matter whether people agree with the way I think, or they don’t agree with the way I think. The point is that these things have to be discussed, and this puts a lid on it. And if you study this judgment in some detail, it has actually taken even more freedoms away. So it’s basically saying that judicial experts can criticize the court, but ordinary people can’t.

AR: It’s absurd for someone who’s as well known as I am to say this, but I really don’t care. I’d be quite happy to be forgotten. That’s not humility, it’s just understanding that there is nobody who is indispensable to the world. We are all just playing through this thing, all of us will be forgotten in geological time, you know. It’s not worth taking yourself too seriously.