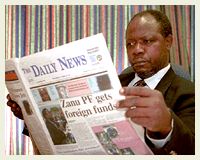 A generation ago, when Robert Mugabe rid his country of the racist legacy of Cecil Rhodes, the newly renamed nation of Zimbabwe served as a democratic inspiration to its neighbors in southern Africa. Today, the tiny white minority is irrelevant — but the overwhelming black majority remains powerless to remove Mugabe, who is again seeking reelection as president. Critics of the 78-year-old leader are routinely jailed and beaten by government goons, and those who oppose Mugabe are accused of engaging in “terrorism.”

Near the top of Mugabe’s terrorist list is Geoff Nyarota. The wry, soft-spoken newspaper editor doesn’t seem like much of a bomb thrower. In fact, the bombs are usually thrown at him: His printing presses were destroyed in an arson attack in January 2001, and explosives were hurled at his office the previous April. Yet Nyarota’s Daily News has never missed an edition. Three years after its founding, it is now widely considered the one indispensable paper in a country where most news media operate under strict official control. And, by all accounts, it drives Mugabe crazy.

Even before the 51-year-old Nyarota started the News, the Mugabe regime had been enraged by his exposés in other newspapers of official corruption, from illicit sales of government cars by politicians to graft-laden real-estate scams. The scoops were usually followed by Nyarota’s departure, at the behest of the nervous publishers. But these days, backed by a group of trusted associates, Nyarota is his own boss.

State prosecutors arrested Nyarota three times last year alone — but the outcry from readers at home and colleagues abroad has always sparked his quick release. “There is no way anything negative can quietly happen to the Daily News now without provoking international reaction,” Nyarota says by phone from Harare. This year will be a test, though. Mugabe is pressing lawmakers to pass his Access to Information and Protection of Privacy Bill requiring state accreditation of journalists and imposing jail terms on unlicensed reporters, including foreign correspondents. Mugabe has already banned BBC crews and forced out wire-service reporters, ordering foreign journalists to get their “dirty, interfering hands” out of his country’s affairs.

When Nyarota received journalism prizes in London and New York last fall, he took the opportunity to chastise the big media corporations that had underwritten his awards. “What amazes Zimbabwean journalists is how easily foreign media have accepted this,” he told a gathering of network anchors and magazine and newspaper editors in November. “Unlike the departed correspondents, they have no other home to go back to. They wait, like sheep to be slaughtered, for the day when the police pay them a nocturnal visit, or the peace of their newsroom is shattered by another bomb.”

The crackdown on journalists is not the only story being overlooked by the international press, Nyarota notes. Thousands of Zimbabweans, born on some of the world’s most fertile farmlands, are now facing starvation — and Nyarota has published extensive reports proving that the state police have supervised the ostensibly spontaneous mobs that have seized farms. After the stories appeared, Nyarota and three of his Daily News colleagues were arrested under the charge of publishing “rumor or false information likely to discredit security forces.” A few days later a judge dismissed the charges.

Despite the hazards, Nyarota has no problem recruiting aspiring journalists. “I worry constantly about the security of my staff,” he says. “It is really my greatest concern, and there is not much I can do. But so far, only one person has left out of fear. The younger reporters tell me that working on the Daily News is a privilege. I don’t know that this is true, but it is gratifying to hear.”