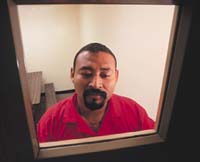 Alex Sanchez has worked for years to calm the violence between the warring gangs that dominate Los Angeles’ Pico Union/Koreatown area — a role that has won him the respect of gang members as well as some of California’s leading politicians. But now he faces a deportation hearing that could not only end his peace-making — it might also lead to his own violent death.

Sanchez, a 30-year-old citizen of El Salvador, former gang member, and current program director of the Los Angeles and San Salvador-based youth organization Homies Unidos, is facing deportation charges before Immigration Court Judge Peters Collantes in a trial beginning today. Neither side disputes his undocumented status. But Sanchez’s supporters say deportation would be tantamount to an execution order.

“We are very fearful for his life, knowing what we know about what happens to gang members or former gang members in El Salvador,” says Angela Sanbrano, executive director of the Central American Resource Center of Los Angeles.

No one has been convicted of any of the killings of Homies Unidos members, says Sanbrano. But Sanchez and his supporters believe the killings are the work of either street gangs or right-wing vigilantes. Homies Unidos’ efforts in Los Angeles and San Salvador, says Sanchez, directly threaten the gangs’ transnational growth and strength.

In recent years, hundreds of convicted criminals, including many gang members, have been deported from Los Angeles to El Salvador — where they have often simply replicated their gang culture anew. As the Salvadoran gangs compete in a bloody battle for numbers, power, and prestige, Homies Unidos’ peace organizing stands in the way, says Sanchez.

The right-wing vigilantes, on the other hand, view all former gang members as a criminal element that needs to be eradicated.

“I fear both sides, because of what I’ve been speaking against,” says Sanchez. “This hearing is a life-or-death decision.”

Reverend Norman S. Johnson, Sr., executive director of the Southern Christian Leadership Conference of Los Angeles, worries that if Sanchez is deported, “the community would experience a void in leadership from a true survivor committed to peace, justice, and non-violence.”

Since becoming an organizer with Homies in 1998, Sanchez has been credited with helping keep a tenuous peace in central Los Angeles, where mostly Latino rival gangs once killed each other by the dozens every year.

Homies Unidos works with other local groups to provide educational and cultural programs to local youths. They have formed a coalition called “The Peacemakers” with other gang workers to expand a truce movement launched by black and Latino gangs after the 1992 riots.

A former member of the Mara Salvatrucha gang, which is composed mainly of Salvadorans, Sanchez maintains a close relationship with many gang members. “That’s what it’s all about — maintaining this trust with the gang members in order to have them change their ways and be a positive person in their own community,” he says.

Sanchez was born in San Salvador in 1971 and came to the US at the age of six, a refugee of his country’s brutal civil war. During the late 80s, Sanchez’s family obtained green cards, but Sanchez had run away from home by that time and joined the then-new Mara Salvatrucha. “It was a complete liberation, it was complete independence. I wanted to rebel against everybody,” he says. As a result, he never secured his papers.

Sanchez has been deported once before. In 1994, he was returned to San Salvador after serving time for a auto-theft felony conviction. He slipped back over the border again the next year, returning to his Los Angeles neighborhood. There, he met Magdaleno Rose-Avila, the founder of Homies Unidos, who steered him toward peace work. Inspired by Rose-Avila’s mentoring and hoping to do better for his newborn son, Sanchez joined Homies as a volunteer, removed many of his old gang tattoos, and began to turn his life around.

Father Greg Boyle, who runs East Los Angeles’ gang intervention program, Jobs For A Future, has watched Alex’s transformation. “His impact on that community is enormous,” says Boyle. “It’s not just that he’s been there and done that, it’s that (gang members) see him as a genuinely caring adult.”

But despite Sanchez’s community support, the INS is pressing forward with deportation charges against him.

Sanchez’s latest immigration troubles, he believes, stem from his success as a gang peace activist. In 1999, Sanchez began putting youths complaining about police brutality in touch with civil rights lawyers. He took a more active role in mediating potential conflicts between gangs. At one point, he says, he prevented a bloody war with a simple three-way phone call.

But just as Sanchez’ street organizing began to show signs of progress, Homies Unidos came under the scrutiny of officers of LAPD’s controversial, now-disbanded CRASH anti-gang unit, according to Sanchez’s lawyer, Allen Diamante. Homies Unidos members say that police told them that their peace meetings seemed to be a front for the creation of a “supergang.”

In January 2000, CRASH officers arrested Sanchez and turned him over to the INS, despite a city council executive order that limits police intervention in immigration cases. Meanwhile, the US Attorney’s Office in Los Angeles moved to have Sanchez deported for illegally re-entering the country.

Sanchez’s case quickly became a cause celebre. At the 2000 Democratic Convention, hundreds of demonstrators chanted “Free Alex Sanchez!” during a protest against the Los Angeles Police Department’s Rampart Division. The same day, Sanchez, who has spent much of his life in prison or juvenile detention, says he organized a hunger strike to protest living conditions at the INS Detention Facility at Terminal Island.

He was released in late September after a federal judge reduced his felony conviction to a misdemeanor. Under pressure from then-State Senator Hayden’s office, the US Attorney dropped its illegal re-entry case. But the INS continues to press its bid for deportation.

In 2000, after an almost decade-long decline, violent crimes in inner Los Angeles spiked upward. Murders alone increased by 25 percent from 1999. Sanchez, among others, attributes this in part to a resurgence in gang activity.

Sanchez worries that, amidst the recession, gang violence will again rise. “You can only hold a truce for so long. But then what do you do after that? That’s when you have to bring in resources into the community, into the youth,” he says.

If Sanchez is deported, his supporters say, there will be one less person to help maintain that truce — and he himself might not survive long enough to witness the outcome.